Are the ice skaters in Yuri On Ice based on real life counterparts?

I watched the first few episodes of Yuri On Ice! and my girlfriend who iceskates said that she thought that the character Yuri Plisetsky really reminded her of Yulia Lipnitskaya in that they shared similar features and backgrounds.

Are they connected? What about the other characters?

Yes, most skaters in Yuri!!! on Ice are based on real-life counterparts.

There are some official sources regarding the model of Yuri!!! on Ice's characters. According to this article,

Sharing the same name as the show’s protagonist, fifteen-year-old Yuri is a extremely talented and at times foul-mouthed Russian skater. He is making his senior debut during the series and is by far one of the youngest skaters in the Grand Prix.

Yūri!!! on Ice's storyboarder Kubo stated in an interview published in the October issue of PASH that Yuri is modeled after Russian figure skater Yulia Lipnitskaya. Currently eighteen years old, Lipnitskaya is also a young powerhouse skater and the youngest skater to ever win a gold at the Olympics at fifteen years old.

Victor, winner of five consecutive World Championships, Grand Prix, and many other competitions, is the rockstar-esque and legendary retired Russian figure skater who decided to coach Yūri. With that record, isn’t difficult to find discern Victor's potential real life counterpart.

Plushenko, four-time Olympic medalist, three-time World Champion, and four-time Grand Prix Final champion, is a legend with an attitude in his own right. Notable as well is how Victor rests his forefinger like he is signaling "hush" that appears to be a nod to Plushenko hush of the crowd in Sochi 2014 Olympics. However, Victor as Plushenko could be up for debate. According to a tweet from Victor's voice actor Junichi Suwabe, Plushenko is not a model for Victor. Is Victor so legendary no one in real life can touch him?

Victor is also partially based on American actor John Cameron Mitchell. In a tweet from Kubo, when she first thought about Victor’s visual design last year, she thought of Mitchell, an actor she saw during a trip to New York.

When Kubo was interviewed regarding Yuri Plisetsky's voice actor, she mentioned a little bit about him,

Why Russian athletes are difficult to approach, it's because the appeal(?) is great. When I saw (Yulia) Lipnitskaya, I thought "If she was a man, it'd be the best", then directly used her as Yuri's image.

Nobunari Oda, a Japanese figure skater, requested to participate in the anime. He appears as a commentator in episode 11 and voiced his own character.

Oda, who watched the anime every week from episode 1, quickly pleaded, "I want to appear as myself and commentating Yuuri's skate program even only for once!" 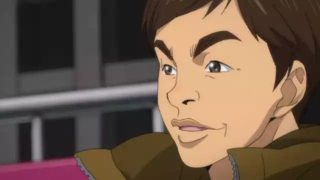 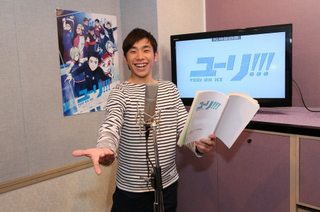 Stéphane Lambiel, a French commentator in episode 12, was also a real-life figure skater. While he was born in Switzerland, he also speaks French, English, German, and Portugal. His outfit was also traced from 2016 NHK Trophy. 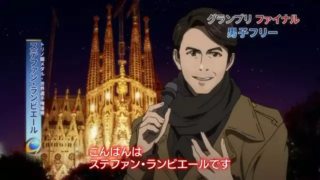 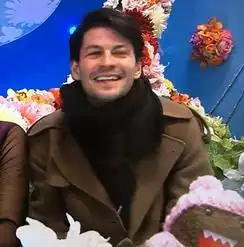 Based on fans theory, the rest of the characters are:

I think Phichit Chulanont's career is based off of Javier Fernandez, as they have similar backgrounds. Phichit is good friends with Yuri and they trained together in Detroit under the same coach; Fernandez is good friends with Hanyu, and they were training partners in Toronto, sharing the same coach. Likewise, Fernandez is the first Spanish skater to achieve the career heights that he did (2018 Olympic medalist, 2-time world champion, etc.). Phichit also mentions that his dream is to bring ice shows/figure skating to Thailand, which Fernandez achieved after his retirement with his Revolution on Ice shows.

I think it's similar to Yuri where they pulled various Japanese skaters to make him, Phichit stands for all skaters from non-winter countries that blazed a trail for figure skating in their respective countries. Martinez is a match for physical appearance, but his career seems a lot more like Fernandez.

0
What does Viktor yell in Yuri On Ice?

1
Is Yuri!!! on Ice anime shounen ai?
4
Why was "Gold Wedding Ring" displayed for less than a second?
3
What is the song that plays at the end of episode 3 after Yuri finishes his performance?
0
What does Viktor yell in Yuri On Ice?
1
Is the Makkachin tissue box based on Yuzuru Hanyu's tissue box?
0
Music in Yuri on Ice in Season 1 Episode 12