How is the concept of aura in Hunter x Hunter?

I still wonder how's the concept of aura in HxH? How many types of aura and what kind of each speciality?

Can someone explain it?

The concept of Nen in HxH is comparable to Aura, Chakra, Haki, Mana, Magic, etc. from different series. It directly translates to Mind Energy apparently. In this series, it is life energy of the wielder who can manipulate it in different ways.

You can obtain Nen abilities by being exposed to Nen. Otherwise it takes years of training.

The most basic Nen can be used by any type of Nen user. These are:

There are other abilities similar the the above which most users can learn to perform but are not "typed": Gyo, In, En, Shu, Ko, Ken, and Ryu are the examples so far.

Some very special users are known as geniuses and learned to use their Nen abilities without mastering the above. The main examples are the Apraiser and the Fortuneteller.

The form a user's Hatsu takes is controlled by that user. While in theory any user can master a skill from any of the 5 basic types, they tend to have an affinity for one type and can master it much easier. Unlike other series, the Nen type is about how you move your aura and not elemental.

These are grouped so the most similar are near each other. As Conjuration requires turning you Nen into something else, they find it easier to do Transmutor skills then Manipulator skills, for instance. Enhancers find it much more difficult to do complex manipulation of Nen in other objects than just emit it as a projectile.

Finally, very specific Nen abilites are somehow much more powerful than more general use abilities. Putting restictings on its use, therefore, such as a ritual, target restictions, or delayed activation can make the Nen ability far more powerful. For this reason, alot of power Nen abilities have complicated rules which must be followed. Kuripika can only use some abilities on spiders. Gon's attacks have a long charging time and a chant. Chollo has several specific conditions which must be met before he can use his main ability.

@Kaine does a great job at summarizing the basic concept of Nen. I think they missed a few things though. So this anwer just supplements their excellent answer so read ONLY AFTER the first one. I also refer to various links to sources where you can read, if want in more detail.

Firstly, the Nen Chart that shows compatibility between Nen Types, 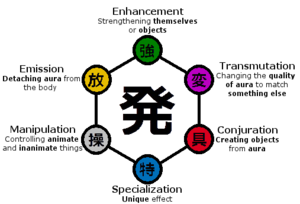 While talking about Nen, its impossible not to mention this chart. It explains why Enhancers can use Emission or Transmutation more easily then Manipulation or Conjuration. Ex: Gon's Rock-Paper-Scissors are kind of Enhancer, Emmitter and Transmutation attacks. Read more here : Source: Nen And Individuality - Wikia

There are numerical approximations to indicate just exactly how efficient one would be at using aura abilities that one is not born into. Starting at one's own aura type, one has the potential to be 100% efficient at using abilities based in that category alone. Then looking at the category chart, one has the potential to be 80% efficient at using aura types adjacent to one's primary type, 40% efficient at the opposite or farthest category, and 60% efficient in the two remaining categories. Specialization is typically unusable for non-Specialists because it is impossible to partially use; one either can or cannot use Specialist abilities. However, Conjurers and Manipulators have 1% efficiency potential of becoming Specialists due to being adjacent to it.

Secondly, How to find the Nen Nature for an individual?

The most popular and surefire is called the Water Divination Test. Put a Leaf atop a cup full of water and perform Ren by putting your hands around the water and voila you know your Nen Type. (Kinda like the Chakra Paper from Naruto).

Hisoka also has a Nen Personality test which is funny but obviously not a surefire way of finding out the Nen Type of individual. But it reveals a lot about the Main Characters personality types since they usually fit the mould.

Finally, The Quantification of Nen. There are various quantified versions of Nen, where you can directly predict the damage incurred as well predict the outcome in very simplistic cases. The article below discusses how much damage would an enhancer attack do to a Conjurer defense if both are using the basic and advance Nen techniques equally. Read more here if you are interested in these type of stuff.

I too watched HxH twice.

The Aura concept is basically body energy (Nen) . Every person has different type of attribute.

If you saw Naruto, there is also a concept where their chakra type is decided. Just the same as here.

ONE PiECE - Haki is used to defend, observe, fight & objects can be affected too

Here's a link for you to check out every detail.