How did Tobi control the reanimated jinchuuriki and their tailed beasts?

Did he control them with chakra rods, with the reanimation jutsu or with his Sharingan?

He controlled them using Chakra rods. Tobi controls his Six Paths using a single black receiver embedded into the left side of each of their chests, which were hidden from view.

Tobi combined the reincarnated bodies of the Jinchuriki with his own "Paths of Pain" Jutsu of the Rinnegan. Similar to the paths of Pain retaining the eyes of the caster, each Jinchuriki had a Rinnegan and Sharingan, allowing them the benefits of the Ocular Jutsu. He also seals their respective tailed beast back into their bodies, which he maintains control of through the Demonic Statue of the Outer Path.

He doesn't however channel the Six Paths Techniques through his "Pains". This is presumably because of the effort required to keep six tailed beasts under his control.

Black Receiver Embedded in the Chest of Yugito Ni. 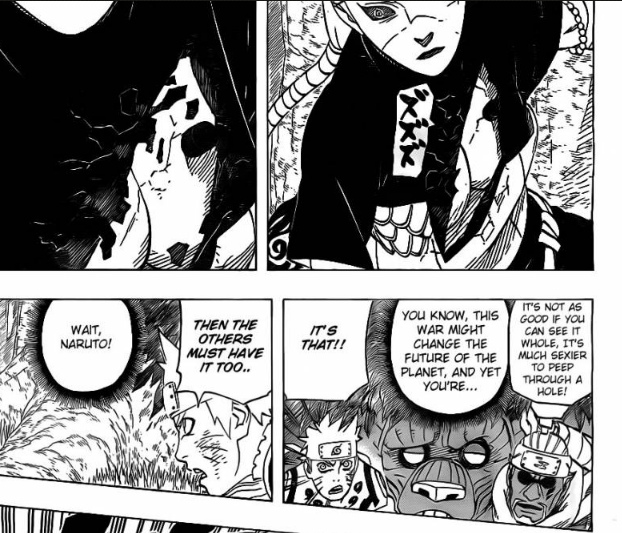 Tobi used a jutsu, exclusive to rinnegan users, called The Six Path Reanimation Jutsu. With this, he can control their corpses remotely as well as their chakra flow. In ordre to do this, he used chakra rods, impaled within the corpses which transmit he's order to them.

note that he was using this jutsu on previously reanimated corpses(via edo tensei) as you can tell by there eyes.

One characteristic of this jutsu is that the puppets inherit the puppeteer's Kekkei genkai.

7
How was Nagato able to re-awaken and control the Rinnegan?
4
How did the Edo Tensei reanimated Second Mizukage summon the Giant Clam?
13
How and why did the Tailed Beasts grow up?
4
How exactly were Madara and Obito able to control Kurama?
6
How could the four Hokage be reanimated by Orochimaru?
5
Is the Mangekyou Sharingan capable of controlling only the Kyuubi or all the Tailed Beasts?
2
How did Naruto learn the Teleportation Jutsu?
1
Can a jinchuuriki control how many tails their version 2 mode has?
2
Was Madara tricked by Hashirama when he absorbed the latter's senjutsu?
1
How did reanimated Haku and Zabuza die?