In the episode 2 of Kino no Tabi, Kino hunts a rabbit for the three starving men. The men are so hungry that they say they would like to eat it raw rather than waiting for it to be cooked. Then Kino replies:

I cannot allow that. It would be terrible if you were infected by Tsurarekia or something.
ダメです。ツラレキアにでもかかったら、 とんでもないことになる。

I searched for it in Google, but there were no results.
So, what is this "tsurarekia" thing? 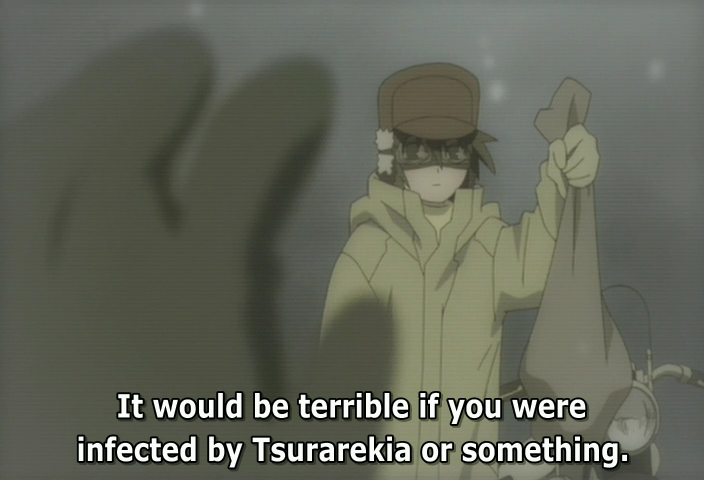 I'm not sure if this is an error in subtitles or if they slightly altered the real disease's name, but either way I think they are referring to Tularemia, which is pronounced as tsuraremia (ツラレミア) in Japanese.

From the English Wikipedia article for Tularemia, bold emphasis is my own:

Tularemia (also known as Pahvant Valley plague, rabbit fever, deer fly fever, and Ohara's fever) is a serious infectious disease caused by the bacterium Francisella tularensis. A Gram-negative, nonmotile coccobacillus, the bacterium has several subspecies with varying degrees of virulence. The most important of those is F. tularensis tularensis (Type A), which is found in lagomorphs (rabbits and similar animals) in North America, and it is highly virulent in humans and domestic rabbits. F. tularensis palaearctica (Type B) occurs mainly in aquatic rodents (beavers, muskrats) in North America and in hares and small rodents in northern Eurasia. It is less virulent for humans and rabbits. The primary vectors are ticks and deer flies, but the disease can also be spread through other arthropods. The disease is named after Tulare County, California.

From the corresponding Japanese Wikipedia article, to show the Japanese pronunciation:

ツラレミア (tsuraremia, Tularemia) comes from the fact that it was discovered in Tulare County, California.

Not the answer you're looking for? Browse other questions tagged japanese-language kinos-journey or ask your own question.

55
Why is Edward Newgate called Whitebeard?
3
Why does Ruriko get angry when she's called as "Rurippe"?
7
What is the device in the garden in the first episode?
14
What book is Saten reading to Febri in episode 19 of Railgun S?
18
What does 'Akame ga Kill' mean and why is it called that?
11
What are the "Angels" called in the original Japanese version?
2
What character is missing from Lio Shirazumi's name to allow him be called Lion?
7
Why is the series called "Amaama to Inazuma"?
1
What is this symbol called which is used to denote "II" in the second season of "The Quintessential Quintuplets"?