Where did the trope of yaoi hands start?

There's a trope in yaoi manga of the character's having disproportionately large hands, often at least as big as their face. 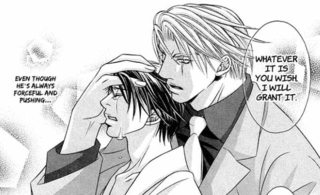 Where did this start? What was the first manga to do this?

This answer might be inconclusive due to lack of information on the topic.

According to Know Your Meme, the term "Yaoi Hands" was originated from MangaFox Otaku message board.

The earliest known mention of Yaoi hands appeared on the Otaku message board MangaFox on March 23rd, 2010, in reference to art featured in the manga Junjou Romantica: Pure Romance. While the image is no longer accessible, the description pointed out the oversized hands depicted on the characters Usami and Misaki.

So.. yes, the term was not originated from Japan. In fact, Japanese might not have heard the term, as shown in step55524's Togetter (Japanese) consisting Japanese tweets by カラサワ about an encounter to an image of "yaoi alpacas" to the revelation of 「やおいの手」 (yaoi no te, yaoi hands).

According to anime-planet, the earliest manga with "Yaoi Hand Syndrome" was Touzandou Tentsui Ibun (1998), a shonen-ai manga by Shungiku Nakamura.

She's also dominating the category with 4 other manga: