Different any art styles for characters

So, here's an example. In Shakugan no Shana, you've got all the normal thing you'd see. But then, in the specials, the characters are different. They aren't different, but their art is. 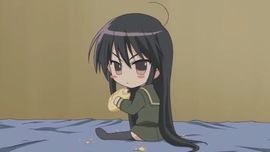 Is there a name by which one would call these by? This doesn't just apply to Shakugan no Shana, applies to many other animes.

In most cases when a character is drawn a different style that is shorter than normal, and is still the same character, it would be a form Japanese caricature called super deformed or SD for short. The term chibi literally means a short or small person, in this context refers to something that's short and usually cute. A chibi version of a character would be a different character, or maybe that character in the past when they were younger. For example the character Chibi-Usa from Sailor Moon is essentially a younger version of main character Usagi, but still a distinct character. Chibi-Usa isn't a caricature of Sailor Moon, she's drawn like any other child her age. On the other the super deformed giant robots in Mobile Suit SD Gundam are caricatures of the normal sized giant robots in previous Gundam series. They aren't drawn simply as smaller version of the robots, instead they have exaggerated heads that are about half as tall as the entire robot.

To put in a western context, super deformed is like getting your portrait drawn by one of those street artists you can find in areas frequented by tourists. Something like chibi would be the series Baby Looney Toons where the characters were all infant versions of the classic Looney Toons characters.

It seems this would be called Chibi. Thanks to Memor-X!

24
Why are there sometimes darkened scenes in new anime?
18
What are the different colors in anime production drawings for?
10
Who did the art direction on for these episodes and scenes?
18
Why do anime series change titles so often (nearly for every “season”)?
7
Is there a name for the art style in Gankutsuou?
15
What are OVAs and how are they different from Specials?
11
Why do characters in some art styles have a broken line for mouths?
13
Do the Blu-ray episodes replace the TV episodes on the Internet once they've been released?
18
Who generally owns the rights for a manga or anime?
3
Are there any differences between normal anime compared to Netflix original series's anime?