Is there a term for "two-faced" or "reverse-tsundere" characters?

Is there a (Japanese) cultural term for reverse-tsundere-type or two-faced characters who are sweet on the outside, but mean people on the inside. Like Kanako from Oreimo and Akira from Lucky Star? 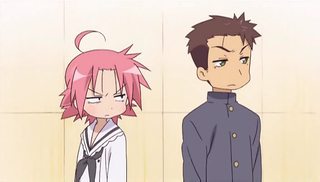 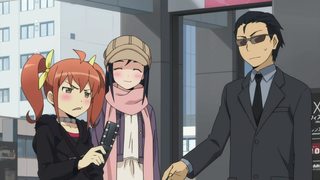 Actually, the term is still tsundere.

The word is derived from the terms tsun tsun (ツンツン), meaning to turn away in disgust, and dere dere (デレデレ) meaning to become 'lovey dovey'.

Type A, also known as harsh, is what we typically consider tsundere; they are typically angry, mean, or pessimistic on the outside, but have a sweet side that they reveal to characters they like (or in other similar situations).

Type B, also known as sweet, is the reverse of Type A. These characters are typically sweet and kind on the outside, but have a hidden meanness inside of themselves that they sometimes unleash, usually in a response similar to that of Type A.

Originally, the term seemed to refer to Type A only, but has expanded over the years:

The term was originally used to describe characters who began with a harsh outgoing personality, but slowly revealed a soft and vulnerable interior over time. Over the years the character archetype has become flanderized, and is now generically associated with a character who flips between the two emotional states at the slightest provocation.

So, it seems the way the word tsundere is structured, it can have either tsun as the default mood, or dere, meaning it can be used to describe either variation of a character. In your case, though, you're looking for a "Type B Tsundere".

It means a character who is "two-faced", acts nice but vicious with certain people or in secret.

Example of haraguro character: Maki from Seto no Hanayome.

18
Why are only some of the references censored in Lucky Star
39
Why do many characters tend to have crazy hair colors and styles?
21
Who was the first "trap character"?
20
How old is the snaggletooth trope?
8
Can someone explain the term "oranyan"?
13
What is that accessory featured around Japanese gods' necks?
7
What is it called when an anime character is emotionless on the inside and sweet/kind on the outisde?
3
Why does Kagami feel necessary to emphasize that she is a simple-minded person?