What are the names written on the back of Yuri Nazarov's photograph?

In episode 6 of Noir, Kirika brings Yuri Nazarov home after he faints and finds a family photograph hidden behind a drawing of a cat. (See link for bigger version of image below.) On the back of the photograph, there is something written in what is probably Russian. 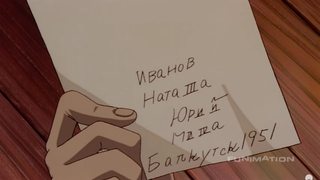 What is written on the back of the photograph? I have at best an extremely poor knowledge of the Cyrillic alphabet and the Russian language, so I have not managed to read everything written there. My guesses so far are, going line by line:

Your guesses are correct. Some of the Cyrillic letters here are written in a strange way: nobody writes ш ("sh") on the second line in this way. The letter и on the third line has an underline that doesn't really belong. Abstracting away such gratuitous elements, I think the fourth line is "Миша" (Misha, a masculine name) in which the two middle letters are distorted with extraneous pen strokes. The full text for completeness:

Presumably, the photograph depicts one female (Наташа) and two males (Юрий, Миша), with "Иванов" being their last/family name. (Actually, in Russian the family name would be written in plural form, i.e., "Ивановы"). Балкутск being the town where the photo is taken in 1951.

Not the answer you're looking for? Browse other questions tagged noir or ask your own question.

1
Do the pages to which Yuri Nazarov's photograph is clipped come from real publications?