How many character have similar appearance with Saber (Arturia)? And who are they?

There are a lot of version of Saber (Arturia). Some that I know are the original blue Saber, Saber Lily, and Alter Saber. 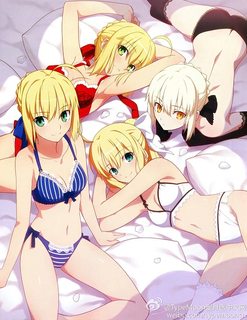 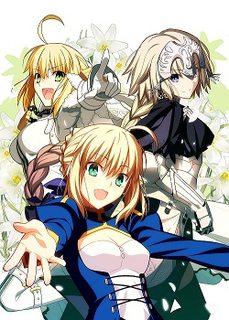 I also saw some other version like Sakura Saber and Master Saber. There are also Saber look alike, Jeanne d'Arc and Red Saber. So how many Arturia version were there and which one are Arturia look alike in Fate Universe or Nasuverse?

There are plenty of them actually. They're known as Saberface or like MHX said, Arturia Species.

Among them there are only seven of Arturia in Nasuverse. They are Saber, Saber Alter, Saber Lily, Lancer, Lancer Alter, Mysterious Heroine X and Berserker Alter.

Not the answer you're looking for? Browse other questions tagged fate-series nasuverse or ask your own question.

7
Why do red Saber and blue Saber look so alike?

5
Has Saber, Arcuied, Shiki or any other Typemoon characters ever canonically meet one other within their respective story?
2
How many Counter-Guardian does Alaya have?
2
Final trigger that ended the Age of Gods(FS/N), World binding anchors beside Rhongomyniad