Who are the three illusionists that have deceived Vindice?

After re-reading Katekyou Hitman Reborn! for like the twentieth time, I noticed something that wasn't really explained. 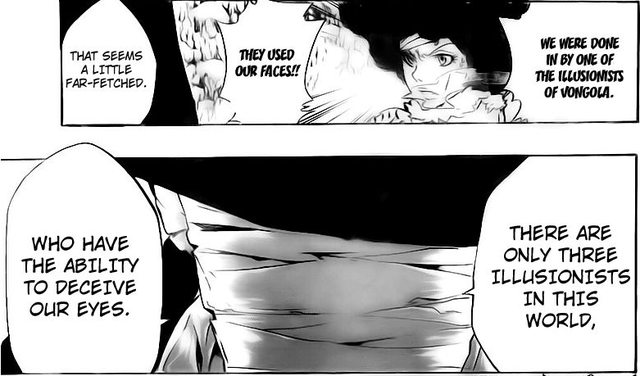 Who are the three illusionists?

The illusionists that could actually pull it are:

For starters, they didn't count Flan. Flan was unknown generally. He was Mukuro's trump card and that worked on both Vindice and Byakuran.

Next, they said, "in this world". That part is very important. Viper and Daemon are not of that world. Viper was dead and I'm guessing Daemon was dealt with or was never known to Vindice.

So the remaining ones are:

You can read more from: Vindice and Illusions

Only three illusionists have the power to fool the Vindice; Flan and Mukuro Rokudo are two of the known three; however Viper, in his released form, has shown that he too is capable of using illusions powerful enough to fool the Vindice, though it was stated that the trick would not work a second time.

5
Why does Bermuda always address characters as -kun?
5
What is the true nature of the Cervello?
4
Why does Tsuna lose his clothes when infused with the Dying Will?
5
What happens to the discarded body of a person hit by the Dying Will bullet?
2
Which episode did Kyouko gave the charm to Tsuna?
3
Why does Takeshi Yamamoto have a interesting naming sense?