Who's this person in the middle of the auditorium supposed to be?

During the teacher's monologue (s01e04 @13:30) about how sometimes it's better to not say anything (or to say less), this scene is shows which doesn't look like the class usually looks, and I'm fairly certain this is supposed to be a reference to another anime or manga, where a character with hair brighter than black appears just above the blonde girl in the middle: 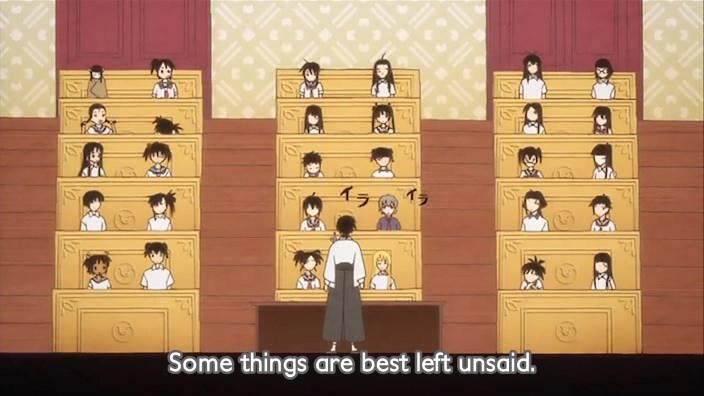 Something tells me that classroom/auditorium should be familiar to someone who watched this anime/manga. What is this a reference to?

I believe this scene is a parody of Negima!?, the Shaft reboot of the Negima anime, which I like to refer to as Pani Poni Negi due to its strong stylistic resemblance to Shaft's Pani Poni Dash. (Plus, when you're speaking, it's really hard to distinguish Negima from Negima!?.)

This is a classroom shot from Negima!? 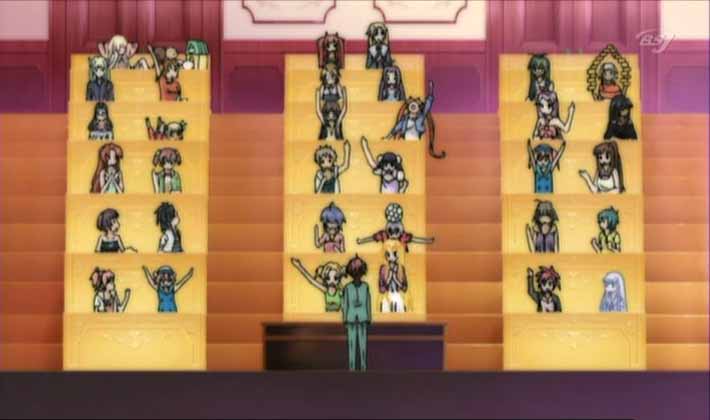 The only Negima characters who aren't accounted for are Evangeline, Chachamaru, and Chizuru, and none of the mystery characters really resemble them, but otherwise it's a pretty striking match. Plus, we know that Shaft has done this before.

18
Who are all the girls fawning over Araragi?

16
Who is this man whose face appears randomly?
9
Is Kafuka Fuura even in the class?
3
Is there a special meaning to the class name "2-H" (2-ふ)?
7
Who are these two students in the back of Itoshiki's class?
3
What's the deal with rotating voice actors in episode 6 of "Zoku Sayonara Zetsubou Sensei"?