Why could Ymir read the can, but Reiner could not?

While watching episode 29, we saw that Ymir could read the letters on the can, but Reiner could not. Why?

As far as I remember, both Ymir and Reiner are Eldians. So should they not both be able to read the letters on the can? What language is supposed to be on it? Why can Ymir read it, but Reiner could not?

After some researches on the wiki, i found something interesting :

Even if they both are Eldians, Ymir was part of the cult of Ymir (It's also the reason why she was condamned to be changed into a titan). It could be there she learned the language on the can, and this language is probably linked to Ymir Fritz herself. However it is pure speculation since we have no way to really know.

The previous answer is a good one, but I have another hypothesis.

Reiner does indeed know the language, but pretends not to, in order to keep his identity safe. He acted in shock because he realized who Ymir was (the titan who ate his friend).

In the anime Reiner does not say "I don't know the language". This is only mentioned in the manga chapter 38.

There is an official answer to this question.

This post contains spoilers. Make sure to be caught up with the manga (currently Chapter 110).

First, let us lay the groundwork for the answer:

Eldian is the official language of Eldia, Marley, and many other nations around the world.

As a result of the old Eldian Empire's imperialism, Eldian is a known language throughout the world. It is spoken both inside and outside the Walls, although their writing systems differ. Ambassadors from across the globe used it to communicate with Willy Tybur during his pre-party.


There are three known writing systems for Eldian:

An archaic version of Eldian is found in ancient manuscripts and texts that were sent by Eren Kruger to the Eldia Restorationists. The language appears to include a lot of visuals and was used by the Eldians from a long time ago. Although it was unreadable to the Grisha Yeager and Restorationists, he and his fellow patriots assumed that the texts confirm their beliefs that Ymir Fritz had brought wealth to mankind, and that the Subjects of Ymir are the chosen children of God. 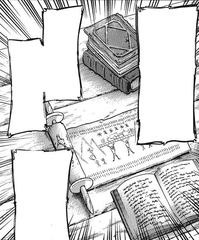 This system of writing is found only inside the Walls. The writing is composed by short, straight strokes and sharp corners, and written horizontally. 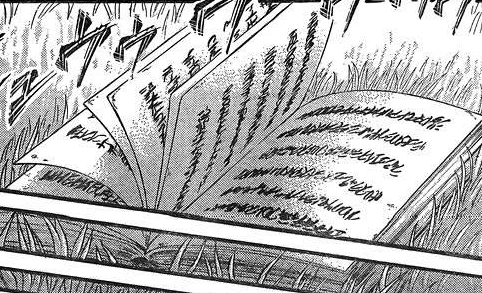 Another system of writing is found when the Survey Corps settled in Utgard Castle after searching for a supposed breach in Wall Rose. They found supplies that were left behind by unknown occupants, but the labels found on them were unreadable to most of the soldiers. When Ymir went off to find food, she found a can with a herring label on it which she proceeded to read out loud. She gave the can to Reiner Braun, who was shocked to find out that she could read the writing. It is later revealed that both Reiner Braun and Ymir came from Marley, confirming that the writing is the system used by the Marleyans and the Eldians living outside the Walls. 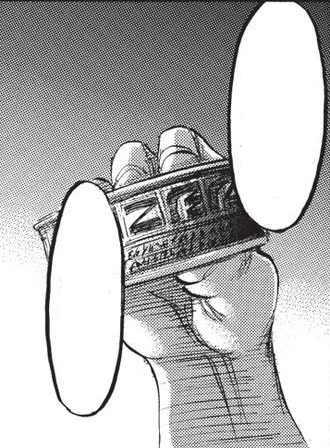 Now regarding your question: According to the Attack on Titan Guidebook,

Reiner Braun could read the herring can like Ymir, but he lied in order to protect his own identity while forcing Ymir to reveal hers.

Well, I can't answer your question directly but you also have to consider that Ymir has been wandering as a titan for about 60 years, thus making her a lot more "older" than Reiner or Berthold. Then again, it is highly unlikely that a language can change so drastically over the course of 60 years…

In this regard I'd like to refer to Chapter 47 of the manga: 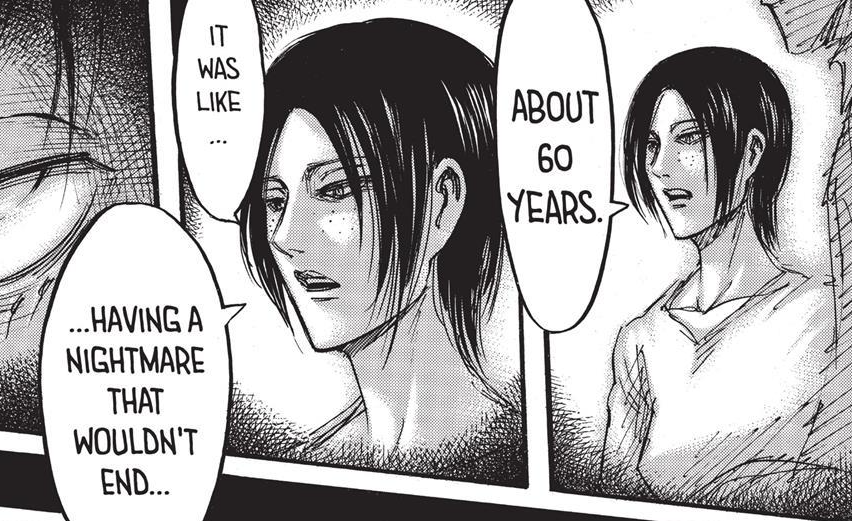 All of the other answers are wrong.

Reiner deals with a dissociate personality disorder. This is because he had developed his persona of a Eldian soldier while actually being a Marleyan enemy, to ease his sense of guilt and overall trauma of causing thousands of deaths. This soldier persona is unaware of Reiner's true identity of being an enemy from another nation (the language is in Marleyan), so this fabricated, soldier part of Reiner's self-consciousness couldn't recognize the language.

8
What is the language used on food can?

18
What is the motive behind the Titan Shifters' actions?
7
In episode 20 of Attack on Titan, how does the Female Titan have 3D Maneuver Gear after regaining human form?
8
What is the language used on food can?
1
What is the scene where Reiner and Bertholdt climb the stairs endlessly refer to?
4
Why didn't Eren Yeager saw the Key before in Attack on Titans?
4
Why didn't Eren's eyes change colour when he inherited the Founding Titan?
1
Why didn't Marcel or Frieda Reiss transform when being eaten?
1
What was the purpose of turning Eldians into titans in the anime season 2?
5
How come not all subjects of Ymir have royal (Fritz) blood?
1
Why did Ymir die after being pierced by a spear, if she should have the regenerative powers of a Titan?