Why do the humans that can turn into titans kill other humans?

In one of the episodes in the anime, the armored titan is breaking one the walls and I'm still trying to figure out why he did that instead if the helping the humans.

That's a really huge question here because to answer it you have to reveal a lot of the anime's secrets which would be really sad but if you really want the truth, I'll strongly summarize : 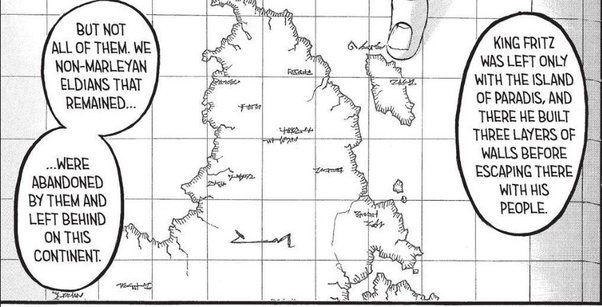 This is a map of the actual world of Shingeki no Kyojin. The little island on the upper-right corner is Paradis : the land where the anime takes place. Its habitants are the Eldians. The huge continent is Marley, the land of the Marleyan people. In short, Marleyan and Eldians used to live on the same place, before an Eldian of royal blood, Ymir Fritz, made a contract with the Earth Devil to gain a power. The power of the Founding Titan.

When she died, her power was split between her 9 descendants who were given the possibility to shift into powerful titans like the Female, the Colossal, the Armored or the Beast Titans. Because of that power, the great nation of Marley felt threatened and waged war against the Eldian. The Eldians became too powerful utterly and destroyed the Marleyan nation and obtained complete rule over the continental mainland.

Many centuries after Eldia's ascension to power, the 145th King of the Fritz family inherited the power of the Founding Titan, the greatest of all Titans. Rather than maintaining order in Eldia as his forebears had done, the King chose instead to relocate the capital of Eldia to the remote island of Paradis. In the King's absence, the surviving peoples of Marley rose up against their oppressors, starting the Great Titan War. At this time, Marley succeeded in obtaining seven of the nine Titans in Eldia's possession, drastically turning the tide of the war. Over an unspecified amount of time, Marley gradually gained control of the continental mainland that once was ruled by Eldia until only Paradis remained as King Fritz's undisputed territory.

At this time, in the year 743, King Fritz used the Progenitor Titan to guide countless Colossus Titans in the raising of three concentric Walls, Maria, Rose, and Sheena, around Eldia's remaining territory. In order to force peace between Eldia and Marley, King Fritz gave the ultimatum that any further act of war against Eldia would be met with the releasing of the countless Titans hidden within the Walls. With this, the Great Titan War ended.

What really happened this day

Then here comes the answer for you question : the Titan Shifters who are standing against the Humanity are actually Marleyan Soldiers whose goal is to defeat Eldians because the King of Marley is looking for the resources that Paradis still have underground. Because of the King Fritz's threat, they act sneaky instead of sending a front attack with their advanced technology and incredible power.

23
How were the walls in Attack on Titan built?
18
What is the motive behind the Titan Shifters' actions?
7
What happened to Eren that made him unable to turn into a Titan in chapter 53 of the manga?
24
How did humans learn how to kill Titans?
11
Why didn't the Titans wipe out humanity yet?
2
Can normal titans dig the ground?
0
Why wasn't this titan involved in any military operation until at least the 3rd Season of the anime?
3
Can humans be cut out of all Titans?