There are several instances where injured Naruto used shadow clones:

Apart from these two, even thoroughly exhausted Kakashi used shadow clones after defeating Zabuza. Were these shadow clones injured?

It depends on what you mean by injury. Typically when a clone receives an injury - as in being struck with an attack - they will dissipate (there are a few cases where this is not true) and will put a lot of stress on the user. You read more information on Does the original jutsu user feel anything when a shadow clone is dispersed forcefully?

Now this is what happens in reverse. According to this Shadow Clone Technique wiki page, Shadow Clones will replicate the user at the time the jutsu is cast.

The clones will be created in roughly the same condition as the original, meaning that previous injuries, such as cuts and scrapes, will appear on the clones.

The clones themselves are not actually injured, but have the appearance of being injured if the user is injured when the jutsu is cast.

As you stated, Kakashi used the jutsu after his battle with Zabuza. You can see this in this YouTube video, where the clones were summoned with torn and bloody vests. 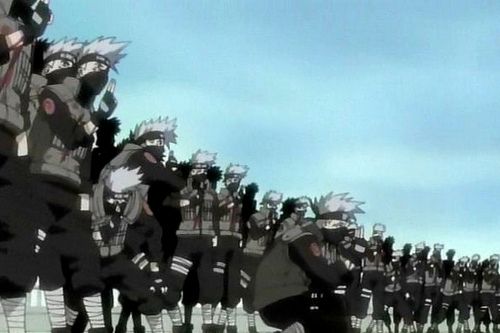 What I believe is that if a clone didn't look like the one whom summoned it, it can't be called a clone, right? Say if you were Naruto and you recieved a huge gash on your stomach, if you did the shadow clone jutsu and they didn't have the wound, then the enemy would easily be able to tell which one is real and which is fake. At least that's what I believe.

I believe that shadow clones or just clones in general just look like the original castor at the time of casting. Like if naruto got a knife to the hand the clone would have the wound but be able to use the hand. What would be the point of naruto summoning clones that were just as injured as he is.

From what I have seen in the anime, the shadow clones reflect the mental image that the user has in mind. I'm inferring this from the fact that Naruto has sometimes transformed the clones into other things that suit his fight situation. For example, against Pain, Naruto changed all the clones into stones.

I believe if and only if the Jutsu caster creates an almost perfect copy of the original user, he can use the clones to confuse the enemy. I mean what's the point of creating a shadow clone if the original can be distinguished based on the injuries that he has sustained in the battle ?

Also, I think the injuries of the user appear on the clones but not necessarily weaken the clone. The clones are weakened only based on the amount chakra the user has at that time. Since shadow cloning is merely the dividing of chakra into clones.

Since shadow clones are a remote mass of chakra essentially and their form is dependent on the ninjutsu user's ability to manipulate it, I suspect that any injury a clone may have would be due to their own injuries accrued during battler or the ninjutsu caster's inability to create a perfect form.

6
Does the original jutsu user feel anything when a shadow clone is dispersed forcefully?