In episode 25, when Eren is fighting Annie, he is seen in what is called "rage/flame" mode (this name is given by fans I believe, though not sure). 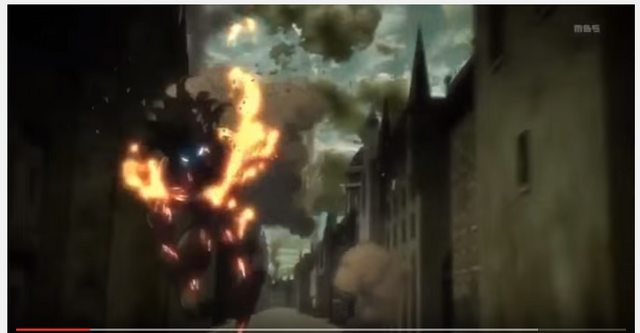 Is he supposed to be stronger when he's like that?

From the ShingekiNoKyojin subreddit, fans have referred to this as "berserk" mode. What is important for any anime-only watcher of the series to know is that berserk mode, or flame mode, isn't present in the Shingeki no Kyojin manga.

This means that berserk mode has no relevance to events further down in the story for the manga. This may change in the anime, and berserk mode may be an important plot point, but I think it's far more likely that Eren will not enter berserk mode again in the series. I think it was just the animators adding a little bit of filler to the Annie fight.

To answer your question, is flame mode stronger? Yeah probably a little. If anything it was a visual notifier to the audience that Eren had a second wind and increased motivation to take Annie out, thus making him "stronger" in a sense.

I personally believe that the berserker mode is just Eren tapping into the founding titans abilities, resulting in the whole flame thing, so yes it would be stronger.

Eren's Berserk Titan form is an increased amount of rage forming in side him wanting to break out, but can only be accssesed in his tian form because if he was a human the power would kill him. The berserk titan is like super saiyan in some other terms they both require rage and they both increase power and they both create a monster that is all I have time for

10
Was the Scouting Legion's patch or the character's Military affiliation changed?
9
Is Eren immortal?
17
What was Eren's vision about?
10
Where is Eren's father Dr. Jaeger?
9
In Shingeki No Kyojin, when does Eren lose 3 years of his memory?
6
Is Eren Jaeger considered a Rogue Titan or an Attack Titan?
9
Who was the other person the colossal titan ate?
4
Why didn't Eren's eyes change colour when he inherited the Founding Titan?
2
What song is played in episode 39 (S3E2) of Attack on Titan at around 13:00?