What is Mike's rank in the Survey Corps?

I'm making this big fanfiction book, and I need some help regarding Military Ranks in the Survey Corps. Here's my question:

Using that format, he would be Major Mike Zacharius. And, you could use those ranks if you really wanted to, but they are not a correct translation of the actual ranking structure within the Survey Corps.

In the Survey Corps, you'll find Commander Erwin Smith oversaw four squads and each squad has a Squad Leader (you can think of this as Squad Commander), a senior team leader, several team leaders, and so on. You can find the basic chain of command within each squad here.

We know the four Squad Leaders (Section/Squad Commanders), are:

Now, the way the Survey Corps is laid out, the Squad Leaders are all of equivalent rank. That is to say, Levi Ackerman, Mike Zacharius, Zoe Hange, and Dita Ness are all technically second-in-command because neither is higher in rank than the other. I believe this equal-in-rank structure was implemented because each squad is technically its own division. Proof that Levi was not next in line is evident in Chapter 57 of the manga when:

Zoe is chosen by Commander Erwin as his replacement upon death.

But, there are some inconsistencies. The manga and the subbed version of the anime both agree that Mike's official title is Squad Leader but in the dub he has been referred to as Major Mike Zacharius. I think this is where things got lost in translation, because there are no appropriate modern-day equivalents for Squad Leader or Section Commander and so that's what we ended up with.

If you wanted to use a more modern-day ranking structure and still maintain the same titles from the dub, you could use the following structure wherein the Corporal, although by definition is higher than Major, is actually equivalent in rank to Major. Then, and only then, would you have a somewhat accurate representation using a current military ranking structure (although, not sure where you're from, but Commander and Corporal don't actually co-exist in the same military branch).

But, in case you decide to go with the ranking system in the manga, it goes something more like this:

Super basic diagram attached in case my description was confusing. 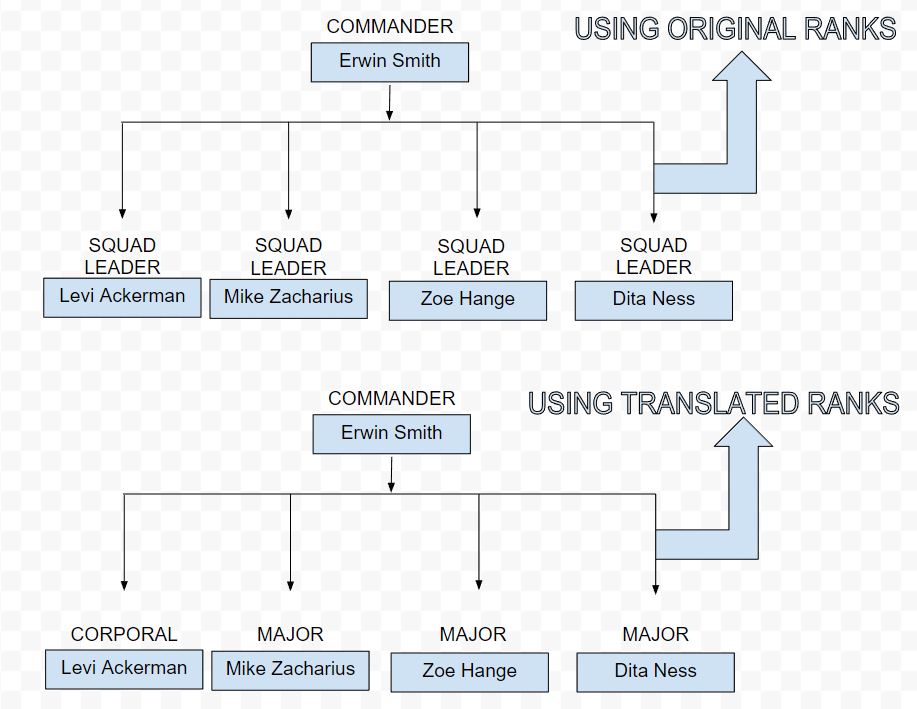