Why did Akagi leave the opportunity to have a better hand in his first game?

I have watched just the anime, and even if he didn't know about specific hands, he leaves the chance to gather the bonus tiles and improve his hand, as Nangou remarked.

Am I missing something here? Being the genius that he is, should he not have played better?

Because he needs Nangou to cooperate. 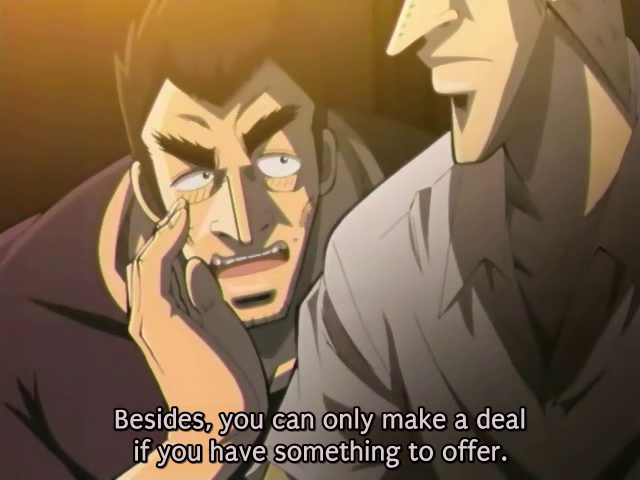 The cops are literally knockin at the door, looking for him and Nangou doesn't seem too happy to go as far as lying to the police. I don't know how he knew they were coming, but I'm guessing they were rather hot on his heels as he was running in the rain. He needs Nangou to give him an alibi, so he forces his hands.

You'll notice that after ignoring the calls, he miraculously has not just Daisangen (big three dragons), but Suu Ankou Tanki (four concealed triplets, single wait) as well. Well, it's not so much a miracle as him ruthelssly cheating by stealing the tiles from the pools when the others were distracted by the cops.

There are a number of ways the way he did this makes it a better plan:

All in all, a nice plan.

It is never really mentioned as to why, so this is mostly speculation. It is very possible Akagi knew or had a gut feeling that the police were closing in, and took the opportunity to use the police to cheat. He might also still have been in a "wait and see" mode, sacrificing a victory in return for the opportunity analyzing the playstyles/patterns of the other players.

As for his genius part, he is the type of genius that cannot be comprehended. He does not play "calculated" or "digital" mahjong, but knows how to play his opponents, read the flow of the game, and take hold of pure chance, as you will see later in the series. Also, the narration mentioned how "normal" his initial play was, compared to his genius plays in the future, so you can think of it as him only starting to warm up.

That being said, let me explain mahjong a little more. Those tiles aren't "bonus" tiles, just plain dragon tiles. While it is an easy way to get a yaku, stealing a tile also has its demerits, such as the inability to call Reach, reducing the worth of your hand, exposing part of your hand and being marked by the other players. Nangou's tendency to go with the easiest hand illustrates that he is a run-of-the-mill mahjong player, in contrast to Akagi, who has some sort of game plan going in his mind that normal people could never imagine. Perhaps Akagi had a feeling that stealing a tile would not lead to victory. I do think that most normal players would've stolen that first chun (including me), which means we could never be Akagi.

No he was just bored by the lack of competition. Sometimes you need to understand that true genius needs to be really challenged. Akagi was probably not even considering the clear implications that this was going to have on his future as he was likely more concerned with how Nangou's remarks from before right?