What chapter does Attack on Titan season 2 finish at?

I just finished the season 2 of Attack on Titan and I want to start to read the manga.

Which chapter should I start from?

Active Oldest Votes
4
Want to improve this post? Add citations from reputable sources by editing the post. Posts with unsourced content may be edited or deleted.

Chapter 51 (volume 13) in manga is the last episode for season 2 anime.

You can start reading from chapter 52.

Yes, the events in Episode 37 of Attack on Titan (Season 2, Episode 12) corresponds to Chapter 50 in the manga. That means that if you wanted to pick up right after Episode 12, as everyone mentioned above, it would be Chapter 51 (Volume 13) of the manga. Just for anyone looking for an episode-manga equivalent of Season 1 and Season 2 of Attack on Titan: 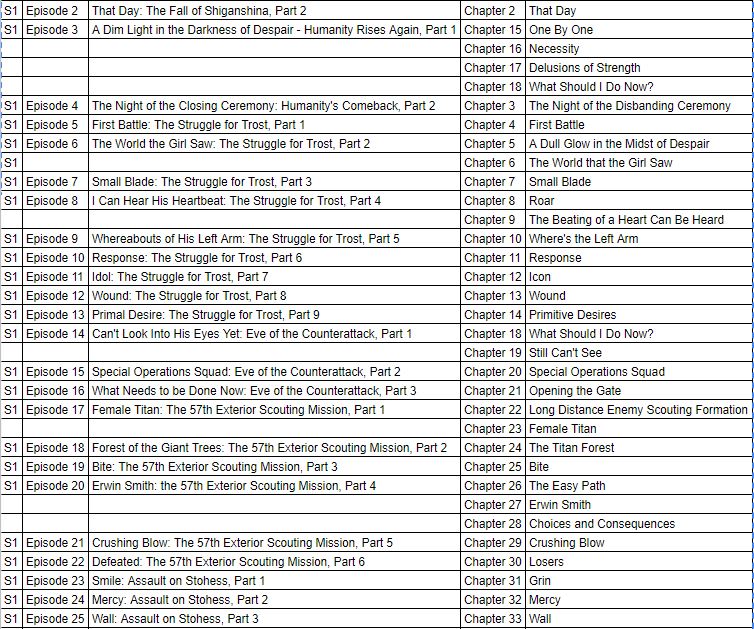 This is the best equivalency I've come up with. Please note that some things were covered in the manga and not the anime, and there were some events that occurred in difference places than in the anime.

Season 2 literally ends right after the conversation between Commander Erwin, Levi, Hange, and Pixis, where they start to formulate a theory (unproven at that point) about the true nature of regular titans.

The squad leaders have Connie report what they suspect about his village and family and then review what they know in light of the new information. Hange presents her theory and Levi remarks that he's been killing human beings for much of his life. After Pixis and Hange leave, Levi is shocked that Erwin seems pleased at the new information. Erwin explains that it's because they are one step closer to the truth. Levi wonders if the truth is worth it, considering their losses. Erwin declares that one day they will knock that wall hiding the truth down.

That conversation takes place in chapter 51 (volume 13) of the manga. There are some parts left out of that conversation in the anime. I suggest starting with chapter 51 and moving on from there. Not sure if we're allowed to post manga pics, so here's a link to the wiki article on that chapter

HyperNymHyperNym
27611 silver badge33 bronze badges
Add a comment  |
1
Want to improve this post? Provide detailed answers to this question, including citations and an explanation of why your answer is correct. Answers without enough detail may be edited or deleted.

After reading some chapters I think the correct one is 51

-9
Is the attack on titan manga complete?