How did Miku become so popular?

Miku is a Vocaloid, and Vocaloid is a voice synthesis software program developed by Yamaha. From what I've read, Vocaloid is not an anime nor manga; it's not a game like Kancolle; it's not a visual novel like Fate/SN; and Miku is not a mascot for a gaming company like Super Sonico or a Windows mascot like OS-tan or an IE mascot like Inori Aizawa. There is a video game series, but originally, she is a singing voice synthesizer software.

But the Vocaloid interface itself looks like this (picture from Wikipedia) 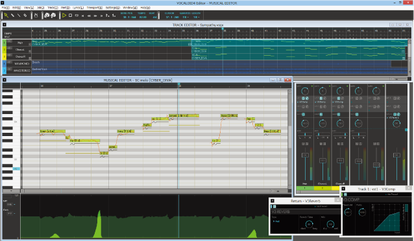 It doesn't look like a software that just anyone would use.

Aside from her really nice character design, what made Miku become so popular? She is all over the internet and has a lot of fanarts, figures, and cosplayer pictures everywhere.

Here is an excerpt from: http://kotaku.com/5936200/why-hatsune-miku-is-the-worlds-most-popular-virtual-idol

Hatsune Miku is more than a little big in Japan. She appears on billboards, in TV commercials, and gives sold-out concerts to legions of fans the world over. Of course, being a popular singer in and of itself isn't something that out of the ordinary. However, what makes her unique is the rather large obstacle she had to overcome in her path to fame—namely that Hatsune Miku isn't even a real person; she's a computer program.

The main fact that she is a program that anyone can use to make their own music despite perhaps not having an optimal singing voice opened up new paths for many music artists. This led to many popular Vocaloid songs done by Miku such as MELT or World is Mine.

On one hand, she was literally made to appeal to her audience raised on anime and sugar-coated J-pop. Her look, manners and expressions where scientifically designed to be loved. That's more than just being "cute". It is possible to custom or cosplay her and as she is virtual, it is even possible to basically have a little Hatsune Miku in your house. That means a lot for fans.

On the other hand, Vocaloid opens up a whole new dimension of music lovers. Generally, music are hidden behind big cooperate names with lots of people behind every song. Vocaloid, on the other hand, is generally created by 1-5 persons and is uploaded straight to the internet or is sold at local markets in Japan, which means it's way easier for the fans to "connect" with the producers and other fans.

26
Why is Miku shown with a leek?
9
What is the background story of Hatsune Miku?
3
Where did it become known that Rin's and Len's names have different first letters?
7
How many times did Len Kagamine die?
0
Original song used to make VOICES tilt-six Remix feat. Miku Hatsune?