What would happen if Eren ate all of the other titans?

What if Eren went and ate every other person with the titan powers? Could Eren potentially become the complete titan, and be able to bypass the 13 year rule?

This is called the curse of Ymir. In Chapter 88, pages 22-23, we discover through Eren's memories that

The very first and original titan, Ymir Fritz, had the power of all nine titans. Even though Ymir was in possession of all nine titan powers, she died 13 years after receiving this power. This death, and the consequent split into the nine separate titans, then imposed the 13-year rule wherein a titan-shifter could not physically withstand the shifting after 13 years. We see that as a titan-shifter gets closer to that 13-year limit, as in the case with the OWL in Chapter 88, they grow increasingly less capable of shifting as the process continually weakens their body. From here, it's up to interpretation of the page below. 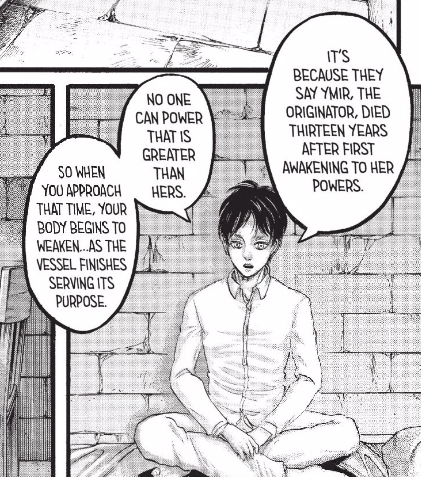 The first interpretation is that

Ymir's body could not withstand the power of titan shifting and died at or upon the thirteenth year. When she died, however, her powers were passed down to 9 other Eldians. This suggests that she may not have known about the limit, or did not choose to select a successor, and allowed her death to distribute her power among the Eldians.

The second interpretation could be that

Ymir died for a reason not yet revealed, and not because she couldn't withstand the power of all nine titans. If this is so, then she must have chosen to divide her power into nine titans for a reason that hasn't yet been revealed. Perhaps this was to limit the power any one titan-shifter could hold, a sort of checks-and-balances system if you will.

If we go by the first interpretation then likely

it would not be possible for anyone, regardless of how many titan-shifting powers they obtained, to break the 13-year rule if the rule was imposed on the very first titan.

If we go by the second interpretation then

it's likely there exists a way for Eren to break the 13-year rule at the expense of obtaining, through the process of consumption, all nine titan powers.

Ymir Fritz died 13 years after gaining the titan power, and her "soul" was split into nine successors, so if those fragments of her soul come together again, then we may see a power struggle between Ymir and Eren.

The 145th Fritz King still has some influence and somewhat controls those who inherit the power of the Founding Titan, so a similar power struggle may be there between Ymir and Eren, if Eren consumes all the titans. And if Eren manages to defeat Ymir then he should be able to bypass the rule, as I think that Ymir still has some control/influence on the titans which causes the "13 year curse".

And I highly doubt that Eren will eat Armin, so I think Eren will not gain the original titan power.

7
What happened to Eren that made him unable to turn into a Titan in chapter 53 of the manga?
9
Who was the other person the colossal titan ate?
4
Why didn't Eren Yeager saw the Key before in Attack on Titans?
1
Why didn't Rod Reiss just eat Eren? Why did he need Historia?
5
Can an Ackerman become a Titan Shifter?
4
If Eren Jaeger dies without transfering his titan powers, will both powers transfer to the same child?
1
Why didn't Marcel or Frieda Reiss transform when being eaten?
2
Why Willy Tybur claimed Eren could attack using the colossus Titans in the walls, if supposedly Eren can't control that ability?
1
If the subjects of Ymir are the descendants of Ymir, and the only race capable of turning into titans, how's that Eren doesnt have royal bloodline?