What are the differences between Ash and Red?

In Pokémon, we have two main characters:

What are the differences between the two? 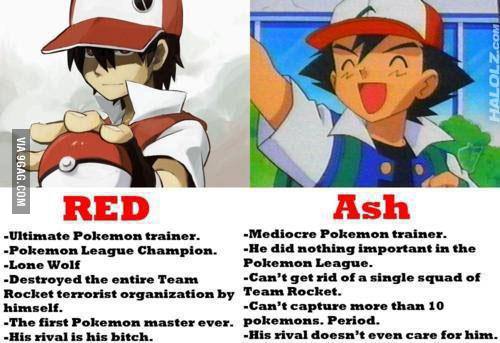 For starters, Red is character who just starred in manga/games, and manga created only after a TV series aired.

10
Are there any relations between the different "sagas" in Pokémon Special/Pokémon Adventures manga?
9
Is Gary also Blue?
6
Who is the trainer with Typhlosion?
14
Why was Pikachu chosen to be the main Pokemon of the anime?
3
Is Ash's time in Kanto's Safari Zone ever detailed?
7
What is the Ash-Greninja form of Greninja?
4
Is Ash technically the Pokemon Champion of Alola like Steven?
1
Why is Steven representing Hoenn at the Masters 8 tournament and not Wallace?