What manga is this image with a depressed girl from? [closed]

I think this is a manga, but I'm not sure which one.

I have tried other sites to get this question answered, but no dice. 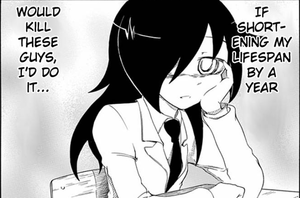 This is from the manga Watashi ga Motenai no wa dō Kangaetemo Omaera ga Warui! (often translated as "It’s Not My Fault That I’m Not Popular!"), which incidentally is getting an anime adaptation starting in July. Wikipedia offers the following synopsis:

Having been well-versed in the world of otome games, fifteen-year-old Tomoko Kuroki believes herself to be popular. However, upon entering high school, she discovers this is far from the truth as she winds up being an unsociable loner and is forced to take a long hard look at herself for the first time in years. The story follows Tomoko as she attempts to improve her social status as she progresses through high school.

This particular panel is from chapter 7, page 6. Here's a scan of the full page to compare: 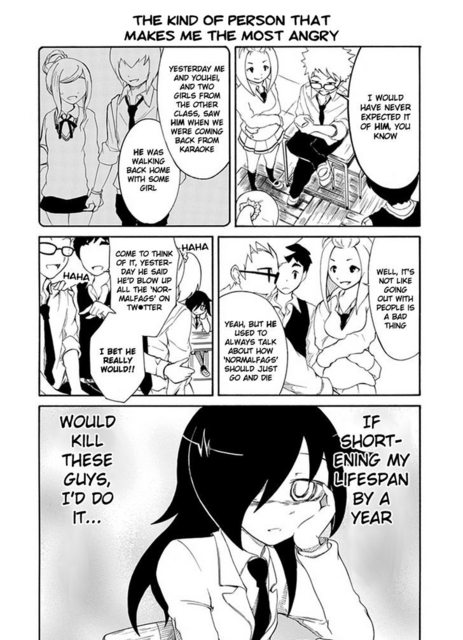 8
What are these three references from episode 9?
9
What reference is this scene involving riding a bicycle to watch the sunrise making?
3
Is this the correct translation of what Tomoko is saying?
3
Why does Tomoko refer to My Little Pony: Friendship is Magic as an anime?
1
What is this cutting instrument Tomoko has, and is she supposed to have it at school?