In Attack on Titan, why does Zeke tell Eren that someday he will save him?

Zeke meets Eren for the first time, their conversation is cut short but as he turns to leave, he addresses Eren and says the following: 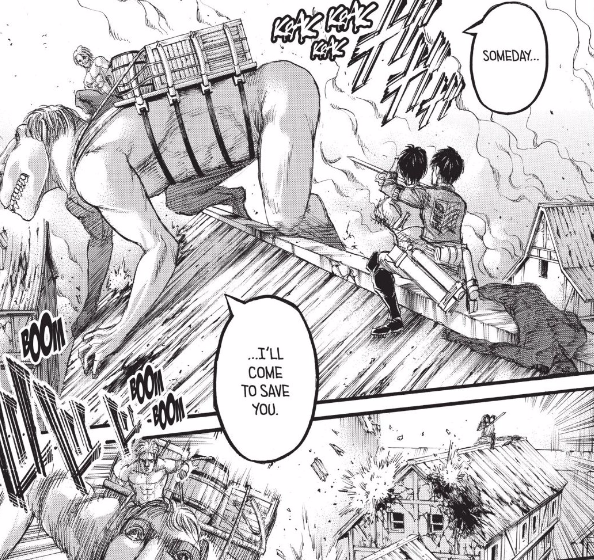 I have been trying to understand what Zeke means by this statement. So far, what I've gathered is that

Zeke and Eren share the same biological father but Zeke refers to their father as strictly Eren's father. Zeke believes that "Eren's father" brainwashed the two of them and Zeke made it clear that he understood what Eren was currently going through.

anyone fighting in the Eldia vs Marley conflict seems to have a very biased view of historical events,

I can't tell the extent of the truth in Zeke's statements. Later in Chapter 94, Zeke makes some statements about

the value of titans when human technology was about to, or already is, surpassing them. And he expressed his concern for the survival of Eldians should they no longer be useful to the world.

So, how is it that Zeke thinks he is going to someday save Eren if

Zeke is working for the one nation that seems most interested in getting rid of the titans should they prove to have little or no military value?

Is the statement Zeke makes to Eren in Chapter 83, page 19 referring to something less obvious than what is mentioned on pages 14-18?

This is a great question, and Isayama is a master of hinting.

The official answer is we don't really know, but we can bring forth some conclusions based on what information we have so far.

1) While it is true that Zeke

has been a loyal Marleyan soldier, is referred to as "The Wonder Child", and has brought Marley many victories, it is shown in recent chapters that Zeke does not fully trust the Marleyan government. He has not told them about his Royal Blood (his mother, Dina Fritz), and even the Titan Scientific Society cannot explain his Titan powers.

Zeke acknowledges the decline in Marley's need of Eldian Titan powers, however he calmly and wisely suggests to return back to Paradis Island and gain control of the Founding Titan. He even mentioned Colt about Zeke's secret, and planned a meeting with all Titan shifters without Marleyian presence. This is showing us Zeke's urge of going back to the island and complete his final wish.

one year left as a Titan Shifter. This is the time to finally reveal his true intentions.

4) Being a "Wonder Child", a great war strategist,

we can safely say that Zeke has noticed that Eldians are not treated well within Marley.

Having mention all the above, we know that Zeke

is currently planning his return on Paradis Island. He is being very careful about the arguments he uses with Marleyans, and he is also trying to get all Titan Shifters with him to Paradis Island.

As you mentioned, both Zeke and Eren

have been brainwashed by Grisha, and turned into killing machines, and this is the reason why Zeke feels he is the only one that can understand Eren the most. Zeke is a product of war, and a master of it. Eren is the only family he has left, and perhaps he does not want Eren to walk the same path as Zeke.

Again, these are all speculations. No one knows what Isayama has been up to. But in this Manga masterpiece, we have watched both protagonists and antagonists reveal their lives, we have sympathized friends and foes, and maybe the ending will be about bringing closer the two sides of the story.

To quote Bertrand Russell: war does not determine who is right - only who is left.

15
Why/How does Eren remember how to activate his Titan power?
7
What happened to Eren that made him unable to turn into a Titan in chapter 53 of the manga?
10
Where is Eren's father Dr. Jaeger?
9
In Shingeki No Kyojin, when does Eren lose 3 years of his memory?
6
Why is the Female Titan after Eren?
2
Why is Zeke interested in Eren?
6
Is Eren Jaeger considered a Rogue Titan or an Attack Titan?
7
Why does Eren loses his equipment after being Titan?
1
What was the purpose of turning Eldians into titans in the anime season 2?
1
Why Willy Tybur claimed Eren could attack using the colossus Titans in the walls, if supposedly Eren can't control that ability?