Why is Todoroki scalded when his mother throws hot water on him?

It's clear that Todoroki left side is burnt but isn't it also his flame side. If he is able to tolerate the high temperature he himself generates from his own flames shouldn't he also have been able to withstand the burn when his mother throws hot water on his face?

I don't think Todoroki necessarily is impervious to heat. Midoriya notices when they fight that Todoroki's use of his cold power is limited to how much cold he himself can stand, and that if he would not refuse to use his heat powers he would be able to remove this limit. So if he's not immune to the cold he may not be immune to heat. However, his father does have the flaming facial hair which doesn't seem to bother him. I think it's most likely that he's immune to the flames and the ice that he creates but when he uses it too much or is affected by something in the environment he's affected normally.

It could have to do with the fact that he was still quite young and probably hadn't worked on his quirk for a long period of time and even if his body was able to withstand the heat from his own flames, the boiling water would of probably been extremely hot to of left a burn of that degree on anyone's face. But I don't think we'll ever really know why.

After finally getting to watch more of the anime, I've thought of an interesting theory for this. Seeing as Todoroki accepts his ice side much more than his fire side, maybe he was working to empower his ice far greater than his fire. With the training leaning more to his ice, his fire and heat resistance might not have been that strong at the time, growing stronger over the years...

Todoroki's scar is a frost burn because her mother poured boiling water over him and in panic used her quirk on him to 'easen' the pain, but it actually made it worse. 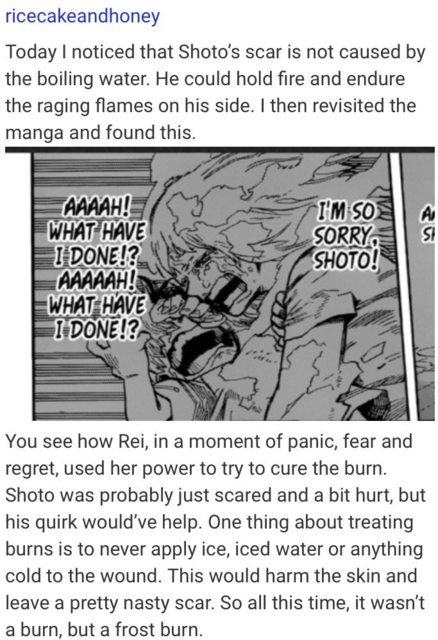 It's basic knowledge not to put ice over the wound as it will make it worse and will create a frost burn scar. If his mother didn't use her quirk, Todoroki would've been fine and wouldn't have a scar as he can easily go through extremely high temperature (on his left) and low temperature (on his right).