Who originally created the Knightmare Frames?

Knightmare Frames are humanoid war machines developed by the Holy Britannian Empire and unveiled during the invasion of Japan.

Is there any known scientist behind their creation, like how Nina created FLEIJA? 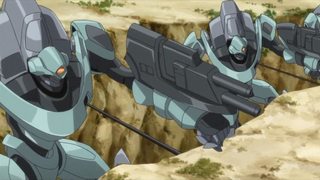 The earliest known developers of knightmare frames were the Ashford Foundation wih their development of the third generation Ganymede and the Io series. However, both of those models were cancelled at the prototype stage because the Ashford Foundation closed down. The cost to develop the nightmares were too high and Milly's grandfather was too much of a fan of old fashioned extravagant parties. After that he used his party connections to move to Area 11 and to become principal of what is now known as the Ashford Academy.

They talk about all this in the second picture drama, stage 3.25.

Aside from Milly's grandfather the only other known developers are Lloyd, Cecile, and Rakshata.

51
Was Lelouch the person driving the cart in the last scene of Code Geass R2?
2
What are the characteristics of the Geass power?
3
Who is Julius Kingsley?
5
Why is Guren's cockpit seat different from other knightmare frames?
0
Who else was in on Lelouch's Zero Requiem plan?
6
What are the different knightmare generations?
5
Why is Suzaku able to see C.C. through the Knightmare?
8
Does Lelouch vi Britannia speak with a Japanese accent?