At what point does Naruto surpass Kakashi?

When I see lists where they rank most powerful shinobi in Naruto, they generally rank Naruto near the top (usually 1 or 2). These lists generally don't even have Kakashi in the top 25, yet Kakashi is a Jounin, whereas Naruto has NEVER even been able to become a Chunin!

So at what point in the show is it that Naruto surpasses Kakashi?

This is highly opinion based question. The lists you might be referring to are mostly personal rankings by individuals who are using bias/potential to rank individual Ninjas. For Example, Ina-Shika-Cho may be great in a team, but lose out individually. However, I'll try to answer the question based on canon information only.

Naruto surpassed Kakashi in terms of Raw Strength and power as a Ninja, when he mastered the Wind Style: Rasenshuriken. This is proven by the fact that he defeats a Ninja Kakashi had trouble with in his 2nd attack and pretty much one shots him.

This was an achievement that showcases Naruto's persistence and talent as a Ninja, creating a move that both his Father and Sensei (Kakashi, Jiraiya) couldn't do. He had been moving up the chain for several instances (like defeating Itachi duplicate), but this is the most clear demarkation of his prowess is beating Kakazu 1v1 with his Rasenshuriken. This is further proven by the fact that Kakashi himself said it wondering if Naruto had surpassed him. 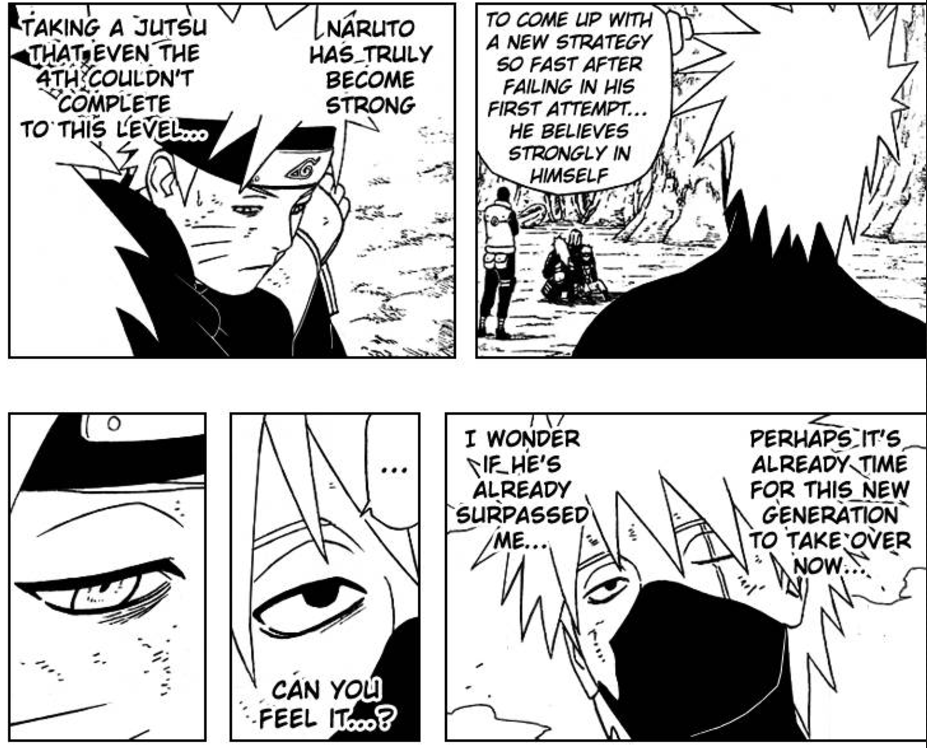 Later also Kakashi admits to Naruto, that he might be even stronger than him now. 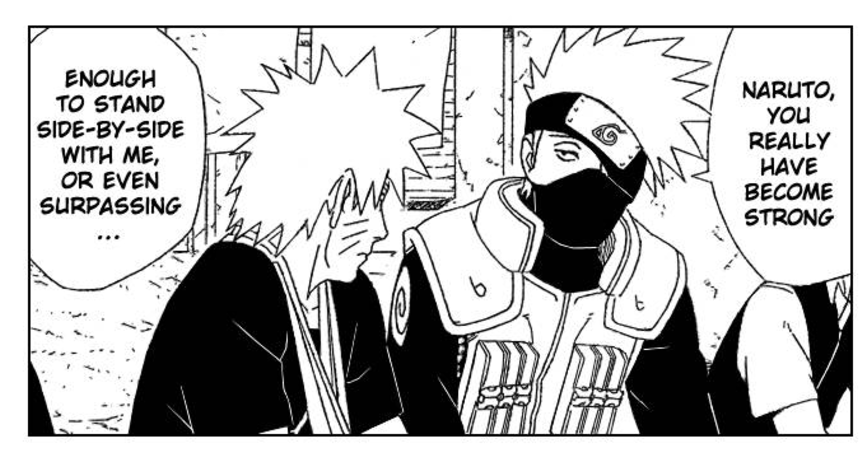 Finally, The moment where everyone acknowledges Naruto's strength and talent is clearly beating Pain. Jiraiya and Kakashi died fighting Pain, while Naruto was able to beat him soundly. This moment, leaves no premise for confusion. So somewhere between Kakuzu and Pain Naruto had surpassed Kakashi!

Naruto surpasses kakashi by the pain arc after Naruto learns senjutsu. His genin status is only a rank. You're forgetting that Naruto trained for Jiraiya for three years and missed all the chunin exams in between.

If you really want to argue about Kakashi's Kamui and his Mangekyou Sharingan that he somehow found out about it in Shippuden Naruto is still stronger. His chakra reserves aren't insane.

Yes, Kakashi is a jounin, and yes Naruto didn't make it in the chuunin exam. But you have to remember that these ninja ranks aren't based on power or strength, but on discipline, tactical skill, and most importantly: taking the exams.

After the chuunin exams in the beginning of the story, Naruto leaves the village and was never able to take another exam. After he grows up and comes back to the village, everybody (his schoolmates) is a chuunin and Neji is already a jounin. He just didn't take the exams. I'm pretty sure he was disciplined and trained enough to make it to jounin

Kakashi might be a genius tactician and skilled in everything ninjutsu, genjutsu and taijutsu BUT he has the chakra content of a small puppy, as seen here, so in the general rank of power, he can't make it very far.

But that's about it, actually. His lack of chakra is his great downfall.

I would actually argue that Naruto surpassed Kakashi right about the beginning of Shippuden. Now, Naruto didn't have control over kyuubi then yet, nor did he have sage mode then BUT STILL, if he could dodge few raikiris (I remember this number being three, but couldn't find sources) that kakashi is able to produce, he could beat him. At that time, it would be the battle of Naruto's life, but two chakra tails from Kyuubi would probably be able to handle that. If you think that that's too early, go forward a few episodes (40 to 43) and you have Naruto almost killing Orochimaru, that is reportedly stronger than Kakashi.

24
Is it possible to combine all five chakra elements?
12
When did Kakashi and Obito awaken their Mangekyou Sharingan?
8
Sources for Christian themes and motifs in Naruto?
5
What was the moral of Sasuke and Orochimaru's arcs across the Naruto series? Was there any?
8
How did so many people get away with cheating during the written portion of the Chunin Exam?
1
How do Toads in Naruto produce Oil?
7
Is Kakashi in love with Kahyo from Kakashi Hiden?
6
At the end, did Naruto skip Chunnin and Jounin rank before becoming Hokage?