Who is this running kid wearing a shirt with Uchiha symbol?

There's a kid wearing a shirt with Uchiha symbol, but I have no idea who s/he is. 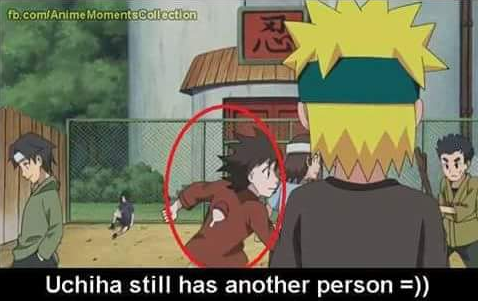 Who is this kid?

After doing some digging around, I discovered this scene is from the episode The Night of the Tragedy. According to the wiki, this is simply just an animation error

In one scene, there is an animation error that an Academy student is shown having an Uchiha crest on the back of his shirt, despite that scene happening after the incident.

We know for a fact that there are very few Uchiha remaining. While it is plausible, as @Hostile Amigo mentioned, that not every Uchiha was present during the incident, this episode is part of the Kakashi: Shadow of the ANBU Black Ops filler arc and shouldn't be counted towards canon.

1
Why was there a kid running with a Uchiha crest on his jacket iafter the Uchiha ending?
14
List of surviving Uchiha
0
Who's the other Uchiha Danzo mentions while recruiting Torune into the foundation

19
What does the symbol 油 on Jiraiya's headband mean?
0
Juubi and Rikudou's brother?
18
Why does every major bad guy end up being a good guy later?
5
When an Uchiha member is going to get married with another Uchiha member, are they marrying their cousin?
3
What is the symbol of the Uchiha clan supposed to be?
3
Who was the little girl being possessed by Orochimaru during his fight with 3rd Hokage?
3
Why is the Uzumaki clan symbol more like a trademark in Konoha
4
What are the origins of Naruto's stomach's double tetragram seal?