What are the meaning behind the operation names in Steins;Gate?

In Steins;Gate , Okarin gives some of his projects operation names, such as "Operation Urd".

He mentions that the names he has given them don't really mean anything, but looking at what the names are referencing, it seems otherwise. 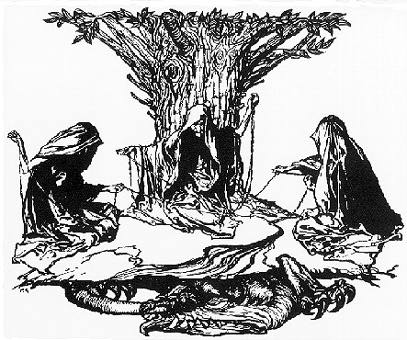 Urd (or Urðr), Verthandi(Verðandi) and Skuld are a trio of Norns that are described as deciding the fates of people. They represent Past, Present and Future respectively. These reflect the time-travel theme of the show

There are ones that I haven't been figured out, such as Operation Eldhrimnir (episode 10) and Operation Valkyria (episode 18). How do these Norse Mythology references fit into the show (and any other ones i may have missed) ?

According to Episode Glossary article on Steins;Gate Wiki, there are 5 operation names coined throughout the series:

Operation Eldhrímnir is coined by Okabe in episode 10 for the plan to invite Suzuha to a party on the following day regardless whether she meets her father or not. The party is meant to be a celebration party in case Suzuha meets her father, and in case she doesn't, it is a farewell party for her.

According to Wikipedia entry on Eldhrímnir:

In Norse mythology, Eldhrímnir (Old Norse "fire-sooty") is the cauldron in which the cook of the gods, Andhrímnir, prepares Sæhrímnir every evening.

The name is probably chosen due to the similarity in the meal theme.

Looking at the entry for Einherjar:

In Norse mythology, Sæhrímnir is the creature killed and eaten every night by the Æsir and einherjar. The cook of the gods, Andhrímnir, is responsible for the slaughter of Sæhrímnir and its preparation in the cauldron Eldhrímnir. After Sæhrímnir is eaten, the beast is brought back to life again to provide sustenance for the following day.

I hope I am not reading too far into this, but since Eldhrímnir is the cauldron which is used to cook food for the einherjar who died in battle, it bears resemblance to the fact that Suzuha introduce herself as a "soldier", and how she fails to meet up with her father the next day. Or maybe the name just simply refers to the party with all the food and drinks, which relates to the fact that the cauldron is the cook for preparing a feast.

Operation Valkyria is coined by Kurisu in episode 18, before the date between Okabe and Ruka (this occurs in the world line where Ruka is an actual girl).

As for the meaning of Valkyria/Valkyrie, citing from Wikipedia:

In Norse mythology, a valkyrie (from Old Norse valkyrja "chooser of the slain") is one of a host of female figures who decide which soldiers die in battle and which live. Selecting among half of those who die in battle (the other half go to the goddess Freyja's afterlife field Fólkvangr), the valkyries bring their chosen to the afterlife hall of the slain, Valhalla, ruled over by the god Odin. There, the deceased warriors become einherjar. When the einherjar are not preparing for the events of Ragnarök, the valkyries bear them mead.

The word valkyrie derives from Old Norse valkyrja (plural valkyrjur), which is composed of two words; the noun valr (referring to the slain on the battlefield) and the verb kjósa (meaning "to choose"). Together, they mean "chooser of the slain".

Putting the context and story behind the name Valkyria together, it probably refers to the role of Kurisu as she tails Okabe and Ruka during their date. The date can also be thought of as a battlefield for Okabe, since this is his first time going on a date. And the fact that Okabe keeps screwing up during the date can also be thought of as "die in battle". (This is the best I can come up with to connect the name and the context of the story).

Being Icelandic and speaking the language (which is the closest language to Old Norse), I noticed that Norse mythology is prevalent throughout this series. For example, immediately on episode 18 during Operation Valkyria, Okabe is on the date with Ruka at the cafe "Völuspá Café". The sign can be seen when they enter the cafe and again when they exit on episode 18.

Völuspá is the first and best known poem of the Edda (collection of Old Norse poems). In the 19th verse of Völuspá, the 3 Norns - Urður, Verðandi, and Skuld are talked about being home at one of the three roots attached to Yggdrasill, the tree of life. In the 30th verse, Valkyries are gathering because a warrior has fallen and they are preparing to bring him to the afterlife, Valhöll.

Considering all the Norse mythology in this series and that the sign is shown so clearly, it is worth mentioning.