Why is the Japanese flag supposed to be funny?

In the first chapter of Fullmetal Alchemist, immediately after the priest explains that he wants to conquer the nation, we see Ed saying that he doesn't care at all. 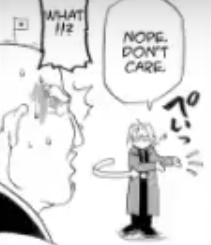 Why is there a Japanese flag on the priest's head? And what does Ed's gesture mean?

Ed's gesture means he throws the priest's ambition away to where the arrow points using his both hands. The SFX (onomatopoeia)「ぺいっ」(pei with small tu to express impetus) dexcribes the movement you toss away something light that you can easily carry such as a crumpled paper. 「ぽいっ」is used commonly but in this case, the author chose「ぺいっ」to make Ed's action a bit funnier because he totally ignored the priest's burning passion to conquer the nation in front of his nose.

About the Japanese flag, I think only the author knows the true meaning of it but I assume the flag is hoisted on the priest's head to make fun of him who's in shock by Ed's indifference. It won't make a difference if it were a American flag or a tiny flower because it doesn't hold a serious meaning which affects the scene but only add a mockery taste to the conversation of them and give a tiny giggle to a reader.

6
How does Mustang fight in the end of Fullmetal Alchemist with injured hands?
5
Why does Mustang address Hawkeye informally after dispatching Envy?
2
Why weren't the people underground affected by the nation-wide transmutation?
9
Why isn't Lust covering up her tattoo?
7
Why do the Homunculi look the way they do?
9
Why aren't characters' names in Fullmetal Alchemist Japanese?
9
Why does Ed not pursue the origin of the fake Philosopher's stone used by Cornello?
7
Can Alphonse sleep in FMA/FMA:B?
2
Why can't Alphonse trade his alchemy for Edward's alchemy?