Where did Scar's other tattoo come from?

In the 2009 anime, Fullmetal Alchemist: Brotherhood, near the end of the series,

Scar fights Wrath. During the battle, Scar surprises Wrath by using construction alchemy, revealing that he has a construction-based tattoo on his left arm.

Scar has not had this tattoo forever, though; in earlier scenes in the series, we can clearly see that Scar has only one tattoo on his body. 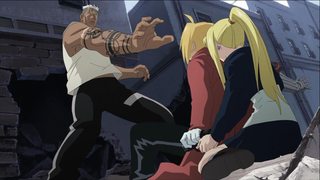 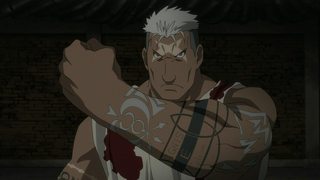 Is it ever stated when Scar receives this tattoo? Who gave it to him?

Although I can't remember it being stated, it is most likely, that he found the tattoo in his brothers notes and put it on his arm with the help of Dr. Marcoh.

The tattoo was most likely one part of the preparations for the 'promised day' in episode 46 (2009), before Scar comes back with Marcoh from the negotiation with the Ishvals.

15
Why can't The Dwarf leave the flask?
23
Why doesn't Greed harden fully?
6
How does Mustang fight in the end of Fullmetal Alchemist with injured hands?
8
Why does Edward prefer to use his automail over Alchemy?
6
Why didn't Ross' broken bracelet cause suspicion?
9
Why isn't Lust covering up her tattoo?
3
Why does Wrath want Ed's limbs?
4
Has the State Alchemist pocket watch ever been shown to be of use in a transmutation?
2
Why can't Alphonse trade his alchemy for Edward's alchemy?
3
Was body rejection even a possibility?