What is on Red Line?

At one of the intersections of Grand Line and Red Line are both Mariejois and the Fishmen Island. I believe it is the only way to go to the "New World". Since we don't know much about it, I was wondering what kind of secrets it could hide.

What exactly is Red Line and what is on it? 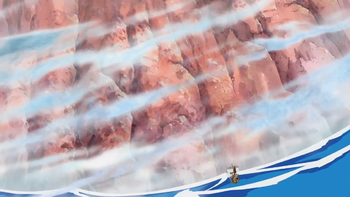 The Red Line is basically a group of islands connected together.

We know that it has it's own season islands, as explained by Nami

The Red Line that crosses the Grand Line has its own Summer, Winter, Spring and Fall "islands" chapter 604

It is 10,000 meters deep, bears the world capital Mariejois, as stated by Hachi.

The Red Line bears the world capital, Mariejois, and is said to be 10,000 meters deep from ocean level to Fishman Island chapter 496

Due to the same height, it is also considered impassable, all though this has been proven to not be the case as

Besides the sheer height, it is also considered indestructible, as demonstrated by Laboon in chapter 104, as he had been ramming the red line to no avail for a considerable amount of time.

8
What are the bounties of the Yonko?
2
What is the soundtrack playing in One Piece when god Usopp is held up by the giant?
2
How does navigation work in One Piece universe?
4
Where is All Blue located?
4
Who and what are the members of CP 0?
3
Straw Hat Luffy gonna destroy the Fishman Island?
9
What are the similarities between Gol D. Roger and Monkey D. Luffy? Are they related by blood? What are their relatives' ages?
0
One piece world travel
1
How germa66 travelled from north blue to south blue