What are the consequences of ignoring Kyubey's contract?

Girls make contracts with Kyubey - they will have a wish granted in exchange of fighting witches using their new powers.

But, what is the consequence of simply not doing it? What if magical girls simply ignore Kyubey?

It somehow doesn't seem like Kyubey even has the power to kill them, otherwise he could just kill off Homura who keeps ruining his attempts to make a contract with Madoka.

The only thing that occurs to me is that their magic will deplete overtime and they need to kill witches to recharge - but then again I imagine that if they never fight witches they'd never deplete their magic in the first place.

Nothing, the end result has always been Magical Girls becoming witches regardless if they fight or not.

After Sayaka became a Witch, in Episode 9 Kyoko is seen using her magic to preserve Sayaka's body. We can speculate that without a soul, the body starts to rot and the Soul Gem is actually preserving the body on its own.

This is somewhat hinted in Episode 10 in the timeline Homura and Madoka defeated Walpurgisnacht and Homura was asked by Madoka to kill her (the final timeline of Moemura). In this timeline, we see that both of their Soul Gems haven't been fully tainted as they didn't have the same pattern as Sayaka's 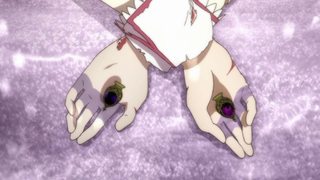 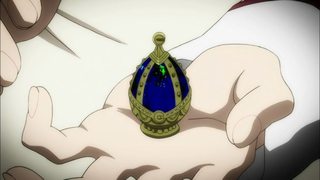 Since all Madoka and Homura was doing was laying in the ruins not using any magic themselves, we can assume that the Soul Gems continue to taint as they maintain a Magical Girl's body until it starts creating those strange patterns in the blackness that Sayaka's Soul Gem did just before she transformed.

Alternatively, since a Magical Girl's body just stops responding when they are separated from their Soul Gem (as demonstrated when Madoka threw Sayaka's off the bridge and it landed in a truck that drove past), one could also assume that the ability to control their body also slowly taints the body, including talking which is what Madoka was doing before Homura kills her.

As such, even if you tried reneg on your side of the contract, I speculate that the end result would still be the Magical Girl becoming a Witch

What about after the series?

In Madoka's Universe, still had Magical Girl's purifying their Soul Gems though those black cubes Wraiths drop (shown when Homura is talking to an Incubator about the witch system)

In Homura's Universe, we aren't 100% as to what has changed with Magical Girls, but given that Homura has given the Magical Girls normal lives and stripped them of their memories (and power as evident with Sayaka's confrontation) and that she had the power to erase the Incubator's from existence but chose not to instead re-purpose them to do Madoka Universe Magical Girl Work (dealing with Earth's Curses), I would assume that she has made it so that so that Magical Girl's won't become witches via inactivity, otherwise this might cause the Law of Cycles of act and reclaim Madoka to deal with them.

12
What are the demons at the end of Madoka Magica?
18
In Madoka Magica, are the girls' powers related to their wishes?
6
Are Homura's wings witch wings in the end?
6
What are the colours of the Magical Girl's Rings?
10
Are the other Puella Magi mangas separate stories?
3
Who are the animators responsible for Madoka Magica?
9
How come the events of Rebellion are possible, with Madoka's wish?
19
Who are the Witches whom these Magical Girls represent?
6
How did Homura able to return to a past where Madoka isn't already a Magical Girl?