How does Saber's summoning to the Fifth Grail War work?

In the Fate series (I've only ever watched Fate/stay night anime, never played the game), I understand that servants are essentially just a reflection of their former self.

But in the case of Arturia (Saber) that actually is her, to my understanding, before she died she made a pact with The World to be able to be summoned as a Servant to seek the Holy Grail. But during the conclusion of the anime, she speaks of a dream and dies. I assume the dream she speaks of was about having met Shirou, but what about her participation in the fourth Holy Grail war?

I'm just very confused about this scenario as a whole, can someone please help clarify this for me? After watching the series I feel that there's no real closure with her character.

How Summoning normally works is that a clone of a Servant is made from the Throne of Heroes and this Clone, and their memories/experience/changes in nature (ie. corruption) are discarded so the original remains the same.

with Arturia's case she made her contract with the World before she died to obtain the Holy Grail in exchange to becoming a Heroic Spirit as such she's not being summoned from the Throne of Heroes but from the moment before her death. When Saber's nature as a Servant is discovered the Visual Novel shows a couple of images to explain how her contract works 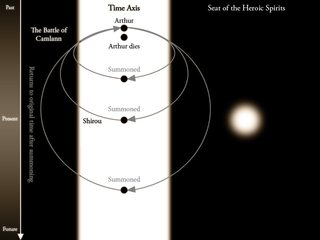 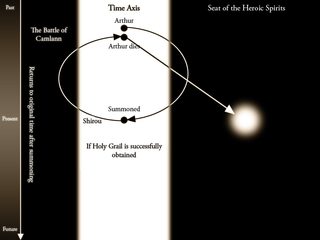 the first image shows how Saber will return to the point in time before her death after each attempt at getting the Grail. the second image is what will happen when she completes her contract in which when she completes it she'll proceed to her death rather than before she died before then going to the Throne of Heroes.

In regards to her memories in Fate/Stay Night, regarding her memories of the 4th War she does have them as on her Wikia page under her Role of Fate/Zero

With the Grail gone and unable to maintain her form, Saber is sent back to the battlefield of Camlann, as she remembers the words of Lancelot and Rider.

also in the Heaven's Feel Route after their run in with Ilya and Beserker, Shirou is confused as to Ilya's hostility to him. Saber contemplates as to whether to explain this to Shirou but instead telling him to seek out Kotomine despite wanting to have as little contact with him as possible due her own personal dislike for her former Enemy Master. before Shirou enters the church (leaving Saber outside) she suggests not to reveal that she's been summoned again.

while is a different route which -Last Episode- wont occur one can speculate that in the Fate Route she stayed outside for the same reason (even though at this point it had yet to be revealed who she is) as such if she remember Kotomine then she remember's Lancelot's and Rider's words. but ofcause as apart of her "dream" it wouldn't be a fond part as it involved Kiritsugu forcing her to destroy the Grail with his remaining Command Spells

As for what other memories she would have in -Last Episode- we can assume that it's only what she would remember by the end of the Fate Route (including her previous attempts) as since in the Fate Route her contract is terminated due to it being her choice to destroy the manifested Holy Grail and accepting her appointment as King any further attempts would not be known to her.

since the Throne of Heroes is disconnected from the rest of the universe allowing the summoning of "heroes" from other timelines (Archer in Fate/Stay Night is the perfect example) there is a high probability that an Arturia would end up there. however since she would have memories of previous Holy Grail Wars/Attempts probably the only way to tell you have summoned Arturia herself or a clone is to ask if she ever got a Holy Grail before.

as a final note, since Fate/Labyrinth was made well after Fate/Stay Night and without knowing when in Arturia's own timeline she would have shown up there (ie. would she have remembered Waver from the 4th War as Waver would remember her?) i would speculate that in the Fate Route she wouldn't have any memories of the events in Fate/Labyrinth.

Not the answer you're looking for? Browse other questions tagged fate-stay-night fate-series .

5
What did Kiritsugu do when he left Fuyuki?

11
Why do the summoned Servants all belong to different classes?
6
What convinced Saber to destroy the Holy Grail in the Unlimited Blade Works movie?
9
Is it possible for one Master to have multiple Servants?
2
Are Servants also given knowledge of future heroes?
6
Why did Saber reveal to Shirou and Rin that she has participated in the previous war?
6
What do servants expect will happen at the end of the Holy Grail war?
9
In what order were the Servants summoned for the 5th Holy Grail War?
3
How can the counter guardians die?
2
Has there ever been a Holy Grail War where the victor got their wish?
1
Why did Saber choose to return to her original timeline in Fate/stay night (Saber route) anime?