Does the US, UK or Aus Localized DVD/Bluray of My Neighbor Totoro have the bathing scene?

When i was staying in a hotel i was watching NHK World and there was a show called Japanology Plus which was talking about the origins and evolution of Japan's Anthropomorphism (the attribution of human traits, emotions, and intentions to non-human entities. ie. the OS-Tans and Hatsune Miku).

to which the guest said that this was something about japanese culture which would seem strange outsiders.

the example he used was in My Neighbor Totoro in that there is a scene where the 2 children in it are bathing with there father but the guest said that the scene had to be removed for the overseas distribution. the reason the guest gave for why it was in the movie was that in Japan this would be very normal for parents to bathe with their children regardless of sex even citing that along time ago there was mixed sex bathing in spas (onsen)

So i am wondering. Does the US, UK or Australian Localized DVD/Bluray of My Neighbor Totoro have the bathing scene?

NOTE: i ask about US, UK and Australian release as i am looking to get it in English, whether dubbed or subbed

I recently bought the Disney Blu-Ray release of My Neighbor Totoro from 2013, and the bath scene is in it. Here's screenshots: 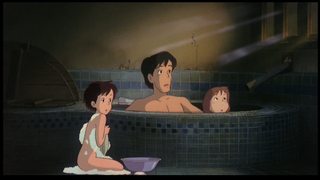 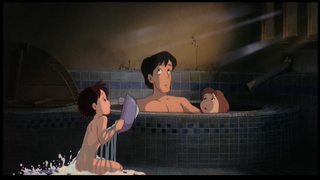 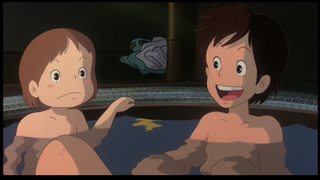 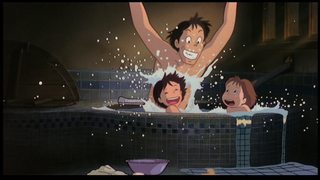 The Disney release is rated G, which means the MPAA considers it suitable to be watched by anyone. It has both subtitles and a dub starring a young Dakota and Elle Fanning as Satsuki and Mei, and Tim Daly, who is best known in fandom for voicing Superman in the DC Animated Universe, as their father.

When I was about 13, I rented the old Fox Video VHS release with the Streamline dub from Blockbuster Video, and I distinctly remember the bath scene also being in that version. The answer I wrote to the linked question presents evidence that Miyazaki refused to allow edited releases of his work after the travesty that was Warriors of the Wind, which would also have applied to the Streamline release of My Neighbor Totoro as Warriors of the Wind was released in 1985, three years before My Neighbor Totoro came out.

Sounds like someone didn't do their research before they made claims about what had or hadn't been cut from international releases of the movie, and made unfounded assumptions about what was and wasn't acceptable. This reminds me of Kaworu Watashiya's utter cluelessness about just what it was that American publishers found objectionable about Kodomo no Jikan.

Not the answer you're looking for? Browse other questions tagged my-neighbor-totoro or ask your own question.

4
What are the differences between the Totoro releases?