Where can I buy the digital version of Gantz manga?

Short answer, NO, there's no digital version of the US release of the GANTZ manga.

Long answer, some authors and publishing companies in Japan back in the day were against publishing their works digitally (like Nishio Isshin, Kawahara Reki, Log Horizon's author whose name keeps evading me, Kadokawa back in the day), I don't know for sure if that was the case with Hiroya Oku or Shueisha (I believe Shueisha was against it but don't quote me on that), but the fact is the Japanese digital version wasn't released until February 18th, 2014 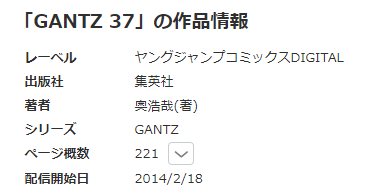 This is 6 months AFTER the last volume was physically released in Japan, which came out on August 19th, 2013. All the volumes were released in bulk on bookwalker that very same day. The link here will take you to the full list of the GANTZ releases (site is in japanese). Nowadays, more and more older series are getting digital releases in Japan.

Which means that there was NO digital release of GANTZ in Japan back in 2007 when Dark Horse made the license deal. IF their original deal had contemplated the future possibility of digital releases in Japan, Dark Horse could legally sell the digital version, but there's been no such release so far so either they don't care or they can't release digitally without another deal.

Not the answer you're looking for? Browse other questions tagged merchandise gantz or ask your own question.

9
Where does the Gantz anime branch off?
7
Where to buy Berserk in digital format?
15
Where do fans exchange info about anime/manga merchandise for sale?
8
Where can I purchase anime soundtracks for download?
0
Is there somewhere I can buy or bid on the whole Ragnarok Into the Abyss manga series?
0
Where can I find a full list of all the Naruto Shippuden uncut box sets?
2
What is the most complete Ghost in the Shell: Stand Alone Complex DVD set to buy?
1
Where can I buy or download the soundtrack for Fairy Tail?
1
Where I can buy “Maquia: When the Promised Flower Blooms” manga/light novel in English?