If Nagato has both of Madara's Rinnegan, how did Madara still have one Sharingan when he met Obito for the first time?

I agree with the fact that even after using the Izanagi Madara's other eye got revived after activating the Rinnegan. But when he met Obito for the first time, he had one Sharingan on the left eye. How can this be? He implanted both of his eyes onto Nagato, so where did that Sharingan come from?

Though only one eye of Nagato is always exposed I noticed he actually has Rinnegan on both eyes. 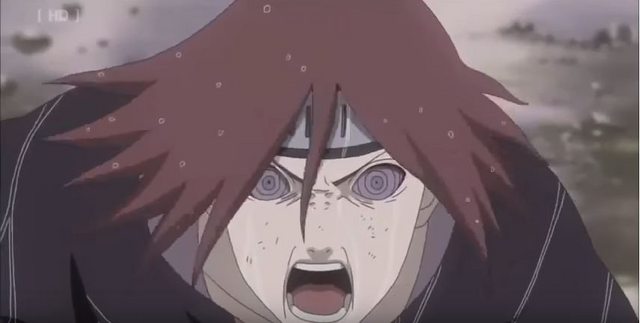 I'm confused, I thought Madara told Obito to implant his Rinnegan (both of them) into Nagato's eyes after his death. I'm not sure if Madara did it himself, but if that's the case, it could be he implanted later a Sharingan eye (it could be two) on him if he possessed them (which is possible that he possessed other Sharingans, like the case of when Obito used Izanagi on his left eye against Konan, it wasn't his). But I insist on my first opinion and let me tell you why.

In the fourth Shinobi War, when Edo Tensei Madara used Rinne Tensei on Obito to revive himself (Rinne Tensei is a Rinnegan technique that allows the user of the Rinnegan to revive another one in exchange for his life, this is the technique that Madara wanted to be revived with in the first place, Madara said it to Obito before he died, said it again when he was revived with the Edo Tensei that he should be revived with the Rinne Tensei, and even Obito said it to Konan while battling her that Nagato's body was ment later to revive him in case he died) so when he did the technique, Madara was revived (came back to life literaly) and his eyes started to somehow vanish until they are gone, which makes sense, he was revived means that he will come back as he was like when he died, and he died with no eyes so he was revived with no eyes and started to get the originals back (because the ones that vanished were fake, an Edo Tensei Rinnegan, when he got his original right Rinnegan, a Bijuu monster said that this is an original Rinnegan and not a fake one like he had before).

Returning to my first point, I think it's obvious that Madara died with no eyes at all, and therefor Obito is the one who implanted the Rinnegan (both of them) in Nagato's body. Your answer isn't here yet, this is just for clarifying things, your real answer is that you are mistaken in the timeline because when Nagato had the Rinnegan, Madara was already dead and Obito already did the job.

Madara gave his both Rinnegan eyes to Nagato, and he implanted later a Sharingan eye after it in the left side (not two but just one, he said it to Obito when he met him, and he didn't say where or from who he got it, he even tells Obito to take his right Sharingan eye and transplant it in him if he gonna die due to his try hard to escape because he was badly injured).

Obviously that Sharingan that Madara have when he save obito, do not belong to him. Maybe when Madara activated the rinnengan, he infiltrated the leaf village and killed some uchiha to steal a sharingan. After returning to his den, he takes off both rinnegan and gives them to black or white zetsu to be implanted in nagato and Madara implanted himself that Sharingan. Zetsu can penetrate any wall so is easy to Zetsu to infiltrate in any where.

Not the answer you're looking for? Browse other questions tagged naruto naruto-gaiden .

30
Why do some Sharingan eyes have unique Mangekyou abilities?
5
How does Obito have two Sharingans if Madara took one?
0
How does Madara have Rinnegan in both eyes?
2
Why is Boruto's Dojutsu different?
3
Why was Kisame surprised when he saw Obito (Tobi/fake Madara) without the mask the second time they've met in person?
5
How did Nagato have his eyes before Madara’s death during the 2nd Shinobi war?
1
Can't Kakashi take Obito's Sharingan, and Sasuke take Madara's Rinnegan?
0
How can Obito use Rinne rebirth using Nagato's Rinnegan eyes?