How does Killy's weapon in Blame! universe work?

The Gravitational Beam Emitter is a powerful gun used by Killy, other special Safeguards, and Silicon Creatures. It has immense destructive capacity, able to blow through multiple walls with a single blow, causing perfectly round holes within them, followed by explosions. The weapon emits so much force, that with a single shot it would stagger it's users backwards due to the incredible gravity of the weapon. It can blow everything it touches into bits. 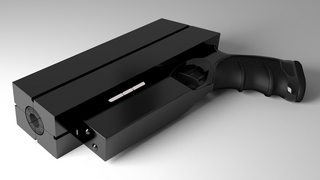 Is there any scientific explanation about this weapons? Like, how can we use the weapon, etc.

This kind of weapon also appeared in Knights of Sidonia by the same author. KoS's Wikia page has slightly more information regarding Gravitational Beam Emitter a.k.a. Graviton Radiation Emitter:

The Graviton Radiation Emitter (sometimes called the Gravitational Beam Emitter) is a futuristic technology conceived by Ochiai, and first used by the chimera Kanata.

The first Graviton Radiation Emitter was grown into the chimera Kanata, installed as his right eye. Grown using Gauna placenta, it is strongly hinted that the structure of the emitter was grown from the second Placental Hoshijiro, and then installed into Kanata.

After the Mizuki's shakedown cruise, construction of the second and third Graviton Radiation Emitters was completed. Made entirely from mechanical parts, they no longer relied on placenta for their construction.

But the two series are, to my knowledge, not related; Tsutomu Nihei probably just recycled the same conceptual weapon.

Since this weapon is so blue-sky theoretical, there's no way there's gonna be a scientific explanation about its workings for the coming centuries or even millennia. There is a related discussion on Physics.SE which you can peruse at your leisure.

I can't find a link right now, but Tsutomu Nihei gave a sort of explanation once that went something like this; The City is incomprehensibly vast, most likely expanding toward the edges of the Solar System. So it's a truly massive object and, as such, should exert a tremendous amount of gravity; far more than what would normally collapse any star into a black hole. In order to retain its structure and not collapse in on itself, there must be technology within it that manipulates space and gravity to offset the implossive force and maintain about 1G throughout every stratum/layer of the sphere.

Here's where the GBE comes in. Nihei suggested that the GBE fires a beam of gravitons in such a way that this retention force is disrupted, thus allowing gravity to behave normally along the path of the beam, which is sufficient to collapse that space/material in upon itself. Combine this intense localized gravitational force with the energy released from matter being almost instantaneously compressed into ~0 volume, and the result is the spectacular destruction we see when Killy fires it.

Not the answer you're looking for? Browse other questions tagged blame or ask your own question.

1
How long did Killi's journey through “The City” took?
0
Who is the blond woman in Blame?
4
In what order do I consume the Blame! universe?