Why does Shanks already have his scar at the beginning of One Piece? 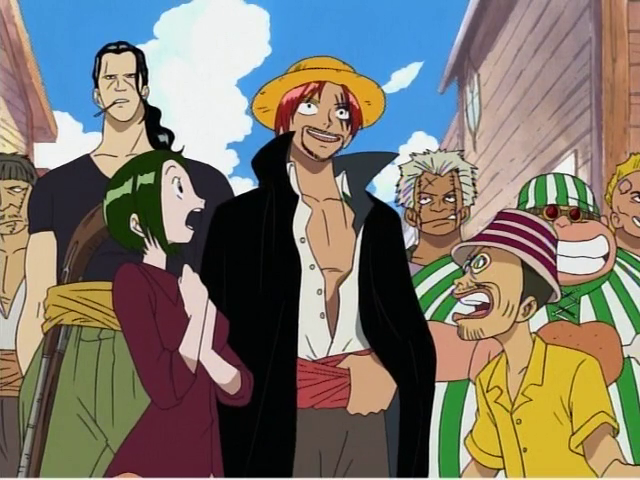 In this image of Shanks from Luffy's hometown, Luffy was still quite young.

However, it is said that he got his scar from Blackbeard. Did he get his scar when Blackbeard was still a part of Whitebeard's crew? Because I think that when he got this scar, Ace was already after Blackbeard and the commander of 2nd division, but at this time, Ace and Luffy were still young.

The story of the origin of the particular scar (left eye) is told in Chapter 434 / Episode 316. It's given to him by Blackbeard while still on Whitebeard's ship, as part of their crew. By the time Ace and Luffy have grown up, Shanks is one of the Emperors.

The conversation hits a more serious note as Shanks points to his scarred left eye. One of Whitebeard's crew gave it to him, Marshall D. Teach. Shanks has known what Teach has been up to all these years and tries to warn Whitebeard of what may happen if Ace and Teach meet, he begs Whitebeard to stop the search. When Whitebeard outright refuses and states he will teach Teach about morals, Shanks reacts by drawing his sword, stating the rampaging era will not be stopped. Whitebeard and Shanks clash weapons, splitting the skies to the shock of both captains' crew members.

Does he get his scar when Blackbeard was still part of Whitebeard's crew?

Presumably yes, as long as most of Blackbeard's activities happened as he posed as just another crew member of the Whitebeard pirates which Shanks deduced was his cover to how threatening he really is.

But to clarify more of your suspicions, this does mean that it took Shanks (at least) 10 whole years before he told Whitebeard this guy is sinister and strong.

The timeline is Shanks & crew docking at Luffy's village in Luffy's flashback from Episode of Luffy: Adventure on Hand Island. There was episode 4 of One Piece that shows Luffy's past, but this flashback includes when/how he gets his scar & follows closer to Chapter 1: Romance Dawn.

The meeting with Whitebeard happens while the Strawhat Crew is in Water 7 when Luffy is age 17. Shanks only met with Whitebeard once he knew Ace was hunting him down, not just to tell him about the scar which might explain his wait.

Shanks got his scar from Blackbeard the time he was with the Roger Pirates or before he created his own crew. At the meeting (ep.434) with Whitebeard, Shanks said they have been fighting since then, means that Shanks got his scar before he became the captain of Red Hair Pirates. Because, if you notice the flag of the Red Hair Pirates in chapter 1 or episode 1, the flag has a scar already.

Perhaps. Before Whitebeard announced One Piece was real, he had a flashback of when Roger was still alive. In that flashback, he commented on how there was a member of his crew named "Marshall D. Teach”, showing how Teach had joined before Shanks had his scars. Coincidentally, at Roger's execution, Shanks had his straw hat pulled down over his eyes, not giving any indication of having or not having the scar at that time.

It's simple. When Roger and Whitebeard clashed for 3 days, you can see young Blackbeard with a weapon with three blades, and Shanks' scar also has three blade marks, so most probably shanks got that scar as a kid.

Shanks might have got that scar when he was with Roger Pirates. Red hair pirate's flag had the scar mark, so he must have got the scar before becoming a captain. Or it can be a mistake by anime artists like they did in episode 461 where he had both his hands intact.

8
What factor led Zoro to accept Luffy as Captain?
3
Luffy's Straw Hat
3
Is Blackbeard afraid of Luffy?
3
Did Ace master any Haki abilities?
5
Two-armed Shanks after he saves Luffy
4
Why was the Lord of the Coast allowed to live?
6
If Blackbeard removes your power do you regain the ability to swim?
1
Why is Blackbeard in Impel Down?
2
Why is Luffy's scar shaped "X"?
4
When did Shanks get scarred by Blackbeard?