Who is Kagura from Boruto?

In episode 26 of Boruto, we saw a new character named Kagura. He looks like Yagura so much. 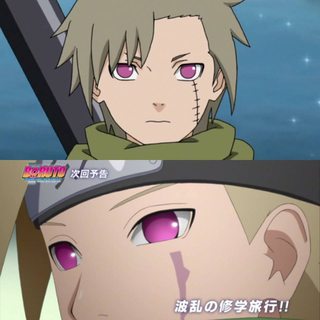 Kagura Karatachi is a shinobi of Kirigakure, who works as an aide to the Sixth Mizukage. He is in line to become one of the seven swordsmen of the mist.

He looks like Yagura so much. Are they related?

Yes, Kagura is Yagura's grandson. Tsurushi Hachiya said so in episode 27 of the Boruto anime as he also mentioned that when Kagura drew his sword he became a different person and killed his classmates which Kagura obviously regrets.

9
Does the Boruto anime have a different story line from the manga?
6
Boruto's Right Eye
2
How can Temari live with Shikamaru?
7
Hagoromo Otsutsuki reincarnation
2
How is Shinobi Bout played?
0
Why does the text of Shino-sensei's math problems look different from normal Japanese?
4
Is Princess Snake based on folklore?
1
When does someone received Kāma?
1
Why didn't Naruto uses his full power that he demonstrated in `Boruto chapter 52` against Sasuke or `Kaguya Ōtsutsuki`