Is the strange reproductive process in The Twelve Kingdoms based on a myth or legend?

In The Twelve Kingdoms, babies are born from Ranka, or giant eggs that grow on trees. Is this based on an myth or legend? Or is it just a way the author invented to explore what happens to a society where the women do not have to give birth? The idea of babies growing in eggs on trees seems like something I've heard of before somewhere else, but I can't recall where. 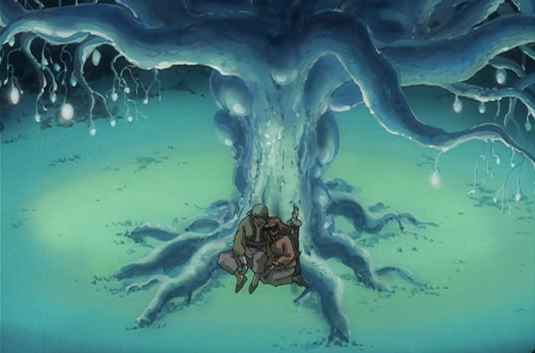 I touch on this in my answer to your other question. Eastern and Buddhist myths often use the cosmic egg to explain creation. In Chinese mythology, it is Pangu who hatches from the egg. In Hindu mythology, it is Brahma. In Buddhism, Buddha himself is depicted as hatching from the egg as seen below. 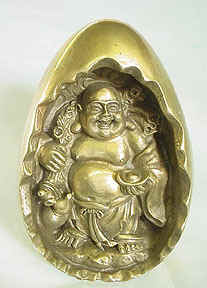 The myth of the World Tree is another that pervades religion.

As with coleopterist's already accepted answer, I don't know the author's inspiration for certain, which would be impossible, unless a writing or interview exists in which Ono explicitly describes any inspiration for the idea. But the following are suggestive, and I think worth mentioning in addition to coleopterist's information regarding Buddhism. Some of these may perhaps be what you were reminded of in term of babies growing in eggs (albeit not from trees; on the other hand, Princess Kaguya of Japanese legend was said to have been born from a bamboo stalk, but not an egg):

...consider the following extremely suggestive legend of T’arhae, the fourth king of Silla. The legend as it is recounted in the Samguk sagi (Historical Records of the Three Kingdoms), the oldest historical chronicle of the Korean kingdoms, is as follows:

T’arhae was born in the country of Tap’ana. That country is one thousand ri northeast of Yamato. Of old, the king of that country married the queen of a country of women. She became pregnant for seven years, and gave birth to a large egg, at which time the King said:

“A human being born from an egg is an inauspicious omen. Throw it away.” But the queen could not bear to simply throw it away, and so she wrapped the egg in a silk cloth and placed it along with some treasures in a box and set it floating upon the sea, where she lost sight of it. ... It thereupon floated to the coast of Ajinp’o ... where an old woman picked it up. When she opened the box, there was a small boy inside.61

Mishina Shōei and others have demonstrated that this legend illustrates a common motif of the nation-founding legends of the Korean kingdoms wherein a child of the sun who is “hatched” from an egg is sent floating on the sea until he reaches a kingdom that has been promised to him. In the Ame no Hiboko/Akaru Hime legend cycle we find at least part of this motif repeated as Akaru Hime, apparently the daughter of the sun god, crosses over to Yamato from Silla after “hatching” from a stone that Ame no Hiboko has metaphorically incubated for an evening.62

Similarly, in the 16th century Chinese novel Fengshen Bang/Fengshen Yanyi/The Investiture of the Gods/The Creation of the Gods,

Nezha's mother, Lady Yin, gave birth to a ball of flesh after being pregnant with him for three years and six months. Li Jing thought that his wife had given birth to a demon and attacked the ball with his sword.

The above descriptions of king or lord thinking a child born from an egg is inauspicious or demonic is an interesting contrast to the King of Kou's repeated claim that as a kaikyaku born of a woman and not of ranka, Yōko would bring ruin and even demons to the land. The Kou king's reversal of this trope of suspicion of the egg-born, however... (the following is a spoiler for Shadow of the Moon, the Sea of Shadow: Ch. 12)

turns out not to be what he truly believes -- quite the opposite in fact: It eventually emerges that he feared Kei becoming, like En, more prosperous than Kou, due to some imagined connection between taika rulers and prosperity.

Lastly, in Chinese Daoist legends of creation, "Pan Gu, the first man, is said to have come forth from chaos (an egg) with two horns, two tusks, and a hairy body."
(As a clarification, he -- not the egg from which he was born -- had the horns, tusks, and body hair.)

10
Do the various kingdoms in The Twelve Kingdoms have historical basis?