How to refer to the two states of Umaru?

I am wondering how do both English-speaking fans and Japanese-speaking fans call these two "states". Is there an official name given?

From what I observe, when she changes from the "small" state to the "big" state, the text "うまうーん" appears behind her: 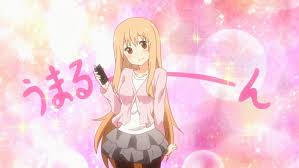 So I suspect that the big form is called うまるーん.

うまるーん is not the name of either form, it is the sound effect of Umaru shifting into her grown-up/outside form.

It's not 100% set in stone, but she often uses the name 「こまる」 ("Komaru") when she's smaller, typically when one of her classmates meets her in that state. Otherwise, the common names for the two states are outside and inside, since she typically changes when she crosses the threshold of their apartment.

There is, also, her third persona, "UMR", which is grown-up like her outside form, but wearing a costume to hide her identity so that she can go to arcades without being spotted. It's also the form in which she becomes friends with Sylphynford Tachibana.

Not the answer you're looking for? Browse other questions tagged himouto-umaru-chan or ask your own question.

13
What are the swastikas on the car's navigation supposed to represent?
0
What is the name of the OST playing in Episode 5 of Himouto! Umaru-chan at 10:34?