Why didn't Taki write his name on Mitsuha's hand?

When Taki meets Mitsuha by the shrine, just before the meteor strikes the town, Taki tells Mitsuha that they should write each other's names on their hands.

Instead of writing his name, Taki instead writes "I love you" on her hand, leaving Mitsuha with no way to remember his name.

Why didn't Taki write his name on Mitsuha's hand? 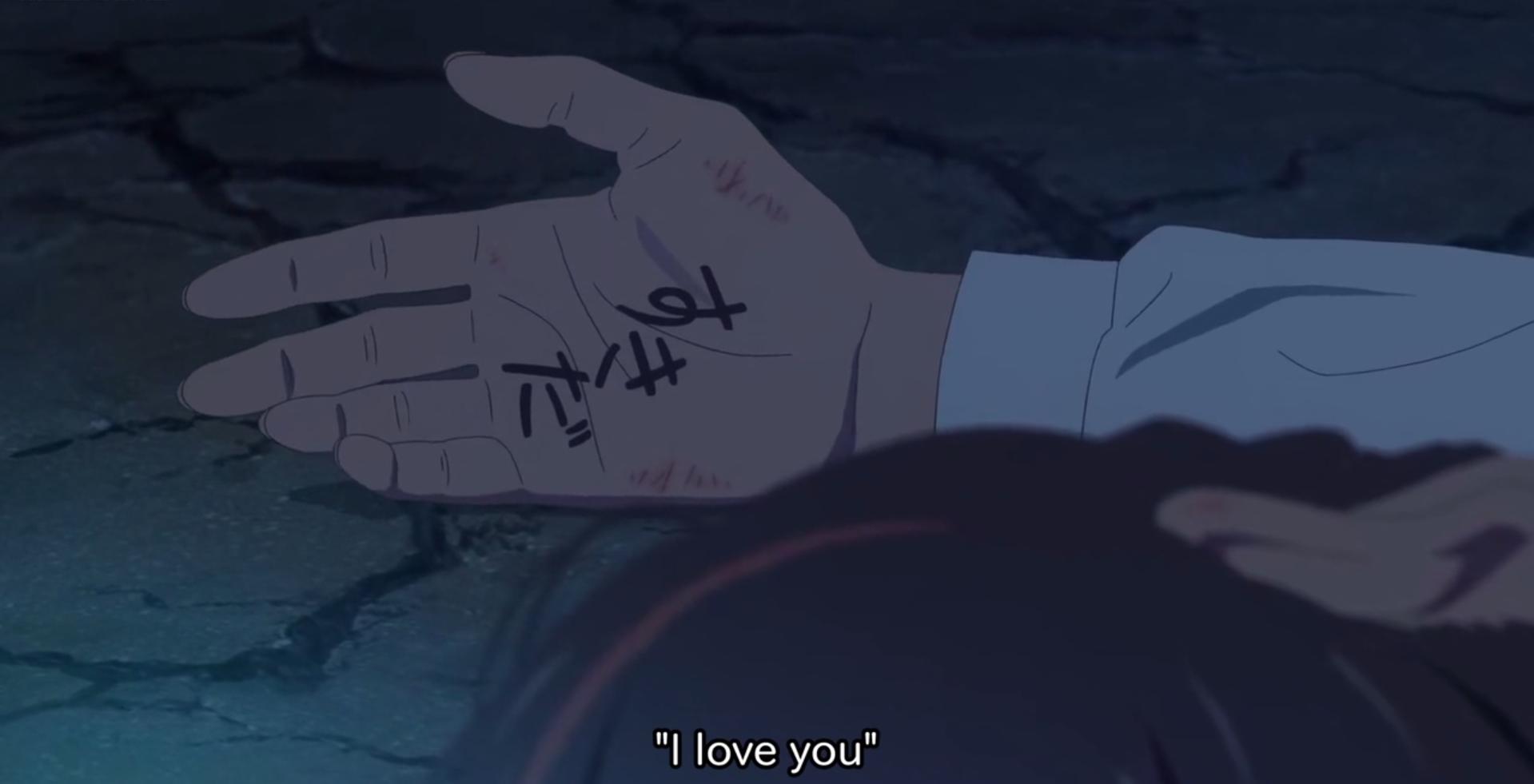 I think it was a sweet gesture that showed a little insight into Taki's character. It shows that he is young, in love, and struggling to find a way to share his feelings with Mitsuha.

At that moment when an opportunity presented itself for him to confess without having to say it out loud (the horror! :D), he foolishly thought it was more important to tell her how he feels than what his name was.

Very frustrating, probably done on purpose by the writer but not completely baseless.

Taki knew that all the things which were happening to him from the past few days, like how his soul went into Mitsuha's body and all other things, would not remain like that for a long time. I think he could understand that after the end of the twilight, they would forget each other, like people forget dreams after waking up. It is obvious that he knew because Mitsuha's grandmother had told him that she also had the same experience when she was young and the same thing had happened to Mitsuha's mother also. But none of them remember much about it.

Based on all these things, according to me, Taki wrote 'I love you' instead of his name because he could feel that this was the last chance for him to convey his feelings. After the twilight ends, nobody knows whether they would meet again or not, whether they would remember each other or forget everything. So Taki thought his feelings were more important than his name at that moment.

There can be other explanations of this questions too, but I have written what I think about this topic.

I saw a video about it sometime back and it said that since they remember feelings more than facts after they switch back to their own bodies, the best way he could make sure they remembered each other was by expressing a feeling. Since love as a feeling is so strong, they remembered it and kept looking for each other subconsciously even after 5/8 years of being apart.

Taki wrote "I love you" instead of his name because it was what the shrine goddess required, that he has to sacrifice what was most important to him upon going back in time.

Tutis111Tutis111
1
Add a comment  |
Highly active question. Earn 10 reputation (not counting the association bonus) in order to answer this question. The reputation requirement helps protect this question from spam and non-answer activity.

Not the answer you're looking for? Browse other questions tagged kimi-no-na-wa or ask your own question.

9
Why couldn't Mitsuha and Taki remember each other's names?
3
Why did Mitsuha's face go red when Taki told her that he drank her kuchikamizake?
6
In “Your Name”, why does anyone let the scammers get away without calling the police?