Did Bleach drop in popularity from 2010 onwards?

I stumbled upon a MAL post. Which had a nice graph which displays that after a small peak in 2010, bleach had a significant drop in rank.

This same post also claims that this data was biased, as the ranking is determined per chapter. Aka, people didn't like the arc bleach was at.

This drop was also visible in the yearly sales

However, unlike in the below chart, the sales popularity seems to remain consistently above 2.5 Mil, until 2016, where it dropped to 2.2 Mil. Suggesting it's popularity just normalized, instead of really 'dropping'

So what really happened to Bleach? Did it really suffer from a significant drop in popularity as shown in the graph below? Or is this just misinterpreted data by a user? 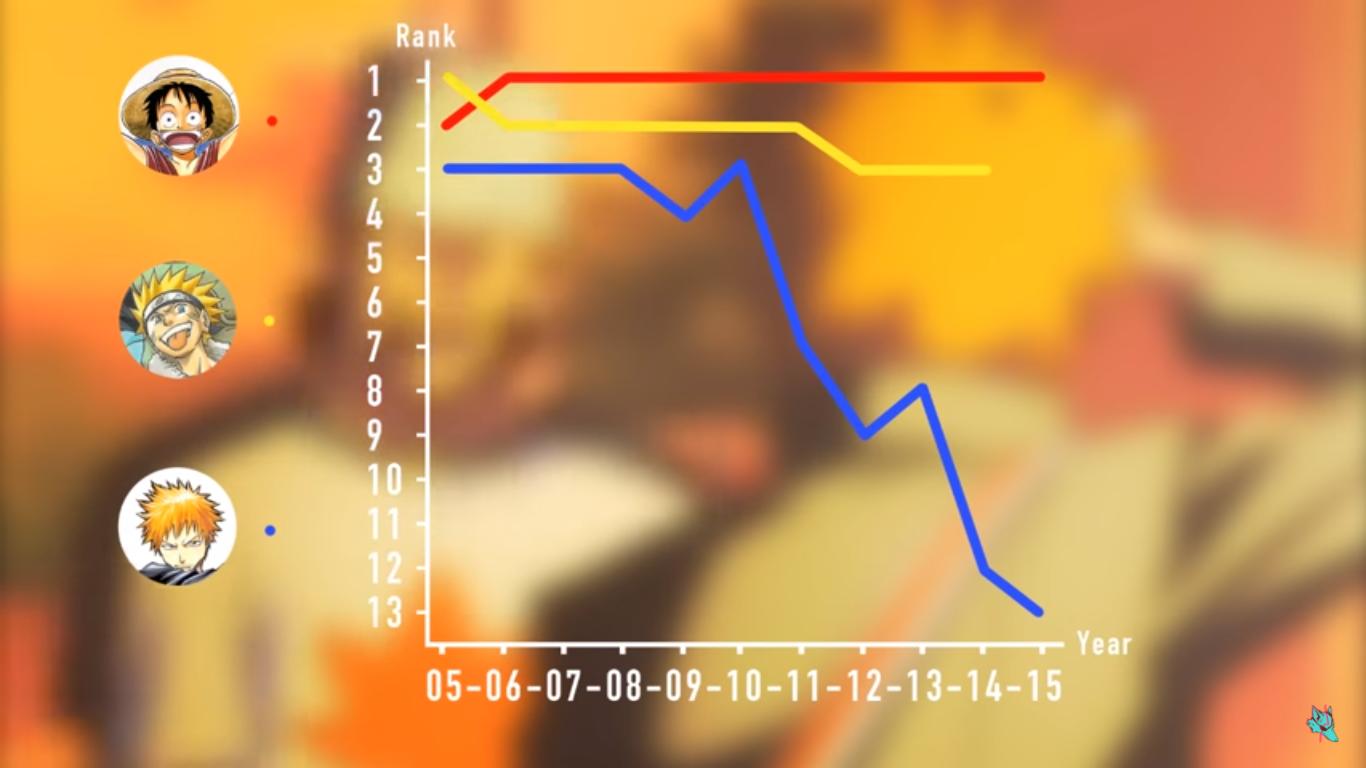 As mentioned in the MAL post itself, that graph was actually made by a YouTuber by the name of Super Eyepatch Wolf. He uses it specifically in a video where he goes in depth as to why Bleach had such a massive fall in popularity:

The Fall of BLEACH: How it Happened

I highly recommend watching the video, but I will give a summary of the main points brought up in the video.

One of Wolf's points is in regards to the author (Tite Kubo) of Bleach's drawing ability and it's deterioration in quality due to the difficulties of being a manga author. The start of Bleach really showcased Kubo's talent in drawing which really brought people into the the world of Bleach. However, the fatigue from the grueling schedule and the like had caused the drawing quality to suffer. This fatigue and frustration was also in part to relationship issues with his editor.

Another point was that Kubo's Story was not really cut out for the long term. He pointed out that several of the characters started out strong but was never really developed. Some even regressed. For one, the main character starts off as this interesting character but regresses to a less expressive reactive type character - compared to Naruto and One Piece where they are proactively going after their well-established goals. Also, at one point, the story stops shifting constantly (going from a typical monster of the week to the introduction of the Soul Society arc which tapped into teenager's feelings as the became a part of the foreign adult world to the amazing Aizen arc) and started recycling several of its previous tropes. This leads to the main problem of nothing really changes as pretty much after each arc everything gets a factory reset. The backlash from the fans and editorial department when these problems began to show really pushed it down in rankings, leading to its rushed three chapters to end it before it got canceled.

In essence: Drawing and Drafting (drawing panels/ panel structure) quality diminished, the extremely difficult schedule of a mangaka and issues with his editor wore him down, and his story plot quality lost what gave it its wide appeal in the first place especially since it was not written for the long term.

8
Where and how does the Bleach anime diverge from the manga?
4
Is this girl really from Bleach?
4
Why did the Bleach anime stop airing? And did the manga also end its serialization?
1
Where to read Bleach from after the Ichigo & Aizen fight in the anime?
6
Why did Aizen kidnap Orihime in Bleach?
1
What's the song in Bleach episode 119 from 17:15?
2
Which Episode of Bleach is this quote from? / Help me cite this quote
2
In Bleach, if a Shinigami transfers their power to a human, where does their zanpakuto come from?