What is the jutsu that ninjas use to appear/disappear instantly?

Some users of the jutsu are Kakashi, Gai, Genma, Kabuto, etc. It can often be seen when Anbu members are dismissed.

The most common one I know of and I think you are talking about is the Body Flicker Technique (also known as Teleportation Jutsu, or Shunshin no Jutsu). 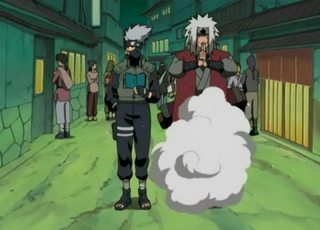 The Body Flicker Technique is a high-speed movement technique, allowing a ninja to move short to long distances at an almost untraceable speed.*

To an observer, it appears as if the user has teleported. A puff of smoke is occasionally used to disguise the user's movements. It is accomplished by using chakra to temporarily vitalise the body and move at extreme speeds. The amount of chakra required depends on the overall distance and elevation between the user and the intended destination.

It could also be a shadow clone.

3
How can Naruto characters teleport/disappear?

24
Why was Neji Hyuuga surprised to see Naruto's Kage Bunshin no Jutsu in the Chuunin Exams?
7
Is there any clan/individual with extraordinary hearing ability to sense people in Naruto?
12
At what age did Kakashi Hatake become a Jounin?
2
Why can Naruto use Rasengan more than Kakashi using Chidori?
4
What makes an S-ranked shinobi?
3
Why do the resurrected bodies disappear in the impure world resurrection jutsu?
3
Do ANBU Black Ops use a teleportation justu?
3
Can the Sharingan Copy Hidden Jutsu?
4
What is the Hiraishin no Jutsu's weakness?
0
Can Byakugan/Rinnegan eyes be transplanted on non-Byakugan/Rinnegan users?