Zoro has trained with Santoryu for basically his entire life, and has completely perfected it by this point. But, just from a fighting perspective, it would be quite difficult to get enough leverage/support with a sword in your teeth to actually do effective damage to anything (at least, without Haki). Unless this is just a classic case of "this is a fantasy world with fruits that give people magical powers, so it's possible for Zoro to have a strong enough neck to use a third sword effectively".

Most of the times we see him fighting, it's usually only with his two swords in his hands, and we barely ever actually see his third sword do anything. We often see implied strikes after he finished Oni Giri or other big finishing moves.

It seems Nitoryu would be just as effective as Santoryu in most situations. What exactly does his third sword do in a normal fight, that is so important for his style to hinge on it? Did the third sword become more useful in normal combat after the timeskip (not including the use of Haki, because if that was included, obviously it would be more useful), or is it still basically the same?

Tl;DR Zoro's Third sword serves a critical and crucial purpose in his ability to use the "Three Swords Style" which is exponentially more powerful. The synergy between the multiple swords is what makes his sword style more complete and usable in an effective form. The difference lies in "between using (just) three swords and three sword style".

Detailed: For us to understand the use/purpose of Zoro's Three Swords you've to assume that One Piece exists in a separate universe and our understanding of things are not the same. This simple assumption allows us to remove a bias when trying to explain "Fantasy Universe Physics"

From a young age Zoro has been shown to be shown possessing unnatural strength, capable of besting opponents far beyond his age. He used Two Swords because he assumed, two were better than one. However, being bested in a thousand duels to Kuina made him rethink. Post her death he decided to use her sword (Wado ichimonji) as one of his primary weapons, just to fulfill both their dreams of being the strongest swordsmen. To this purpose he trained his mouth and neck to extreme lengths to attain the strength, accuracy and flexibility required to use the sword.

Now since no one else has been shown to use Santoryuu in OP universe, I think we can safely assume Zoro invented and developed the style and its techniques while growing up. This chapter front page shows how his juniors are trying to imitate and learn his style in his old Dojo Source: Chapter 807: Cover page 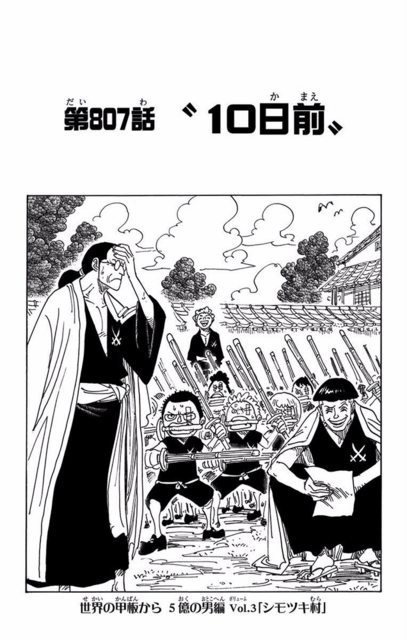 Now, what makes this viable his Zoro's effort and training to develop a comprehensive "Three Swords Style" aka Santoryuu. He is not using just Three swords, he is using the "synergy" between the three swords to gain more power and use techniques which are impossible to use with one or two swords. This was explained early on by Zoro himself in his battle against the NyanNyan brothers.

We've seen numerous instances of this throughout One Piece. Zoro talking about his (in)ability to fight with one sword against Nyan Brothers, his surprise when Mihawk blocks his attack or him mastering new moves. (Pound Cannon, Asura etc.) 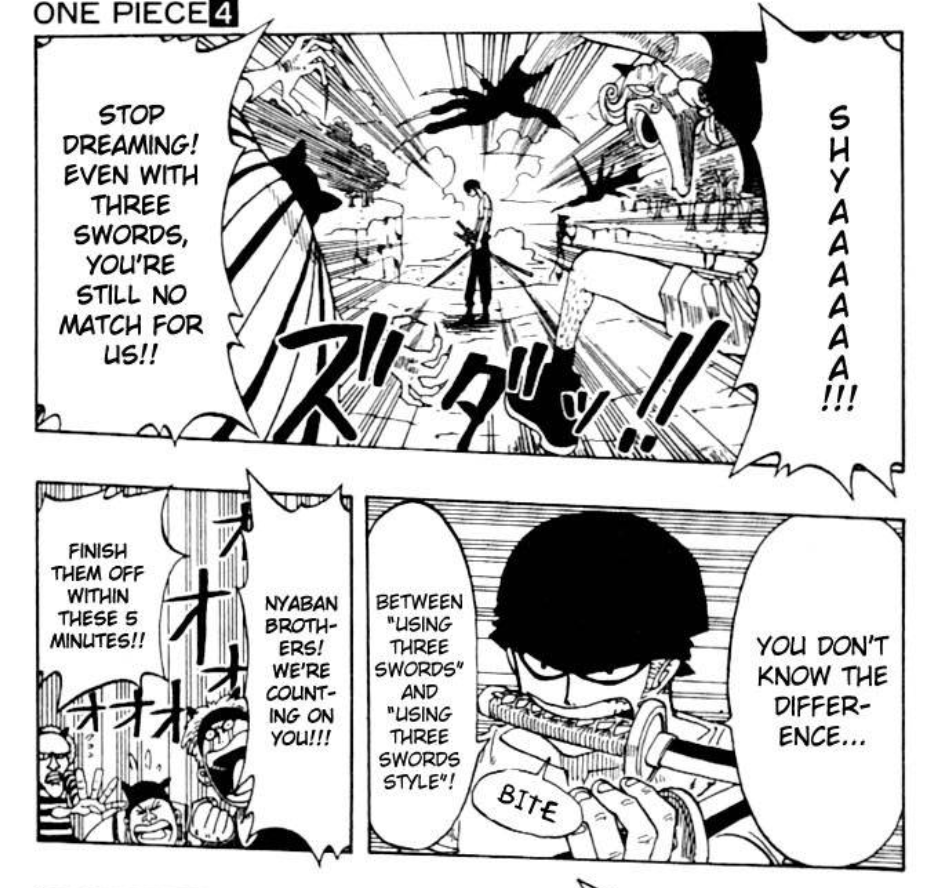 Zoro's third is for defense, not offense. Yes, it does damage. Ever since Zoro was a child, he was training with with dumbbells in his mouth. Besides, Zoro's ability to lift weights is beyond normal humans, even in One Piece.

As long as he can hold it firm, then he can defend himself with it, and consider attacking with 2 swords and forcing the victim into the third sword. It would be inconvenient to try to slash with the neck, not because of lack of power, but because of lack of flexibility; you can't turn your neck too far to the side.

Also, the reason he has 3 swords is that after Kuina dies, he asked her father to gift him with her sword. Since he couldn't beat her with 2 swords, he figured that 3 would be stronger.

As long as Zoro can firmly grab the sword, then it serves its purpose . Note that this was before he learned haki, because since then only that sword is probably stronger than maybe a thousand of his normal 3 sword attacks.

Zoro's main style is santoryu (three swords style), it comes with it's fair share of unique power techniques, including his strongest one, the pound cannon (He used 1080 pound cannon against Pica).

He can also be seen moving his head to attack with the sword during closeups and he also uses it to parry attacks.

Zoro doesnt simply use three swords he uses a three sword style and as yes the third sword can do damage he lacks the flexibility to do any serious damage this third sword is used more for stability in a fight more than damage output. As when he is fighting Pica and using his "Icidai Sanzen Daizen Sekai" attack his third sword doesnt spin instead it is used as more of a driving force to thrust in and give extra push to his attacks. As well he only has the third sword from Kuina after she dies, and furthermore it doesnt have to be a sword as shown when Zoro uses his "Purgatory Onigiri" in Wano and uses the Scythe for his Santoryuu attack

10
How does Zoro's sword technique work?
8
What are the names and grades of Zoro's swords?
3
Are Logia types overpowered?
1
Why does Zoro's "1080 Pound Phoenix" use the term "pound" instead of "kilogram"?
4
What exactly is the deal with Black Blades?
6
What is Shanks' sword made of?
10
What are the similarities between Gol D. Roger and Monkey D. Luffy? Are they related by blood? What are their relatives' ages?
2
Is Law stronger than Zoro in sword technique?
4
What happens to Zoro's scabbards when he's in a fight?
0
How does Machvise even hit anyone?