How can Jiren fly when meditating in the tournament of power if flying was disabled?

In the tournament of power the flying technique was disabled so only characters with wings could fly. But after the fight with Goku , Jiren started meditating in the middle air flying. How is this possible? 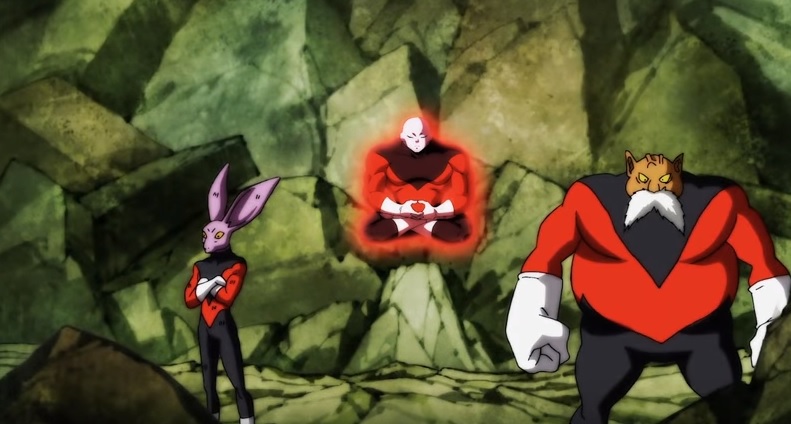 To be fair, some of the fighters like Jiren and even UI Goku are fighting at the levels of a god of destruction. The world of void is infinity and Jiren's mere presence caused infinity to shake and even when Goku emerged during his UI transformation, it was stated that the world of void is shaking. I think when their power is as enormous to ripple across infinity, such rules wouldn't apply to them

It was stated that time itself meant nothing against Jiren's strength so I don't see why a rule like the no flight would apply to him when he is at the level of strength.

*An alternate explanation: We see android 17 use his energy to create a form of footing and he stands on that to eliminate Kakunsa. The special force or special gravity responsible for stopping flight, should have in theory stopped that layer of footing from existing but it didn't. So in other words, android 17 could've sat on that for as long as he wanted and it would appear even as though he was floating. Jiren's energy is obviously a lot superior to android 17 so whatever special forces of gravity responsible to prevent flight aren't strong enough to hold Jiren in place.

19
When does Son Goku learn to fly?
4
What was the first time when Krillin witnessed Kamehameha wave?
2
Are the manga and the anime portraying Beerus as having the same strenght compared to other gods?
0
Can Kale control her full power when she isnt in berserker mode?
1
How does universe 11 expect to win with their current strategy?
3
How could Vegeta defeat Hakaishin Toppo so easily?
2
Did Trunks SSJ2 become much stronger after the sparring with SSJ3 Goku?
3
How can we measure a character's power level in relation to others for the Dragonball Series beyond Frieza?
1
How is possible Moro can defeat super saiyan blues but Majin Buu can fight him?