Are there any relations between the different "sagas" in Pokémon Special/Pokémon Adventures manga?

The Pokémon Special manga series, the "main" Pokémon manga adaptation, has about 40 volumes and take place along all the Pokémon "generations" but how are they related to each other?

I mean, the main characters in each saga changes, so I don't understand how or if they are related to each other or are some kind of "different series" under the same title.

They're set in the same universe. Stories sometimes span chapters (Bulbapedia's name for "sagas"), and main characters from earlier chapters make appearances in later ones.

Pokemon Adventures is divided into several distinct parts, or adventures. There are twelve major divisions at present. Namely

Basically all adventures take place in the same Pokemon world (see map below), but at different locations. Since the manga is based on the video games it makes sense that the protagonists change from adventure to adventure, but they remain in the same timeline and world. They remain at different locations, but their stories intertwine at many occasions. It is therefore not surprising that protagonists from earlier adventures reoccur in later chapters. This can, for example, be seen when in the third adventure all gym leaders from Kanto have to compete with those of Johto at the 10th Pokemon league. It can also be seen in the third adventure that all seven aforementioned protagonists have to work together to defeat the main villain in the Last Battle from chapter 167 to 180. 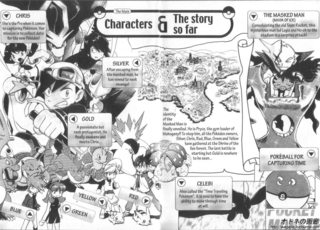 I guess you could say that the adventures are seen from professor Oak's point of view, since in that same chapter 180 we can see how Crystal finished the pokedex. She completed the Pokedex with data on the remaining Pokemon of the original 251 known Pokemon at the time. At this point we can see Professor Oak say

The truth is, about 100 new Pokemon have appeared and I'd thought of asking her to help...

I doubt those 100 Pokemon just appeared. The people of the Hoenn region are probably well aware of the existence of these Pokemon, but professor Oak, might just recently have heard about them. So in that sense, we see the world evolve from the point of view of those from Kanto and especially professor Oak as the most frequent recurring character in the series.

Map of the Pokemon world 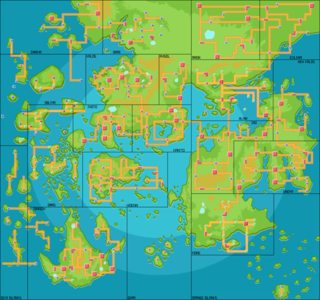 28
What are the differences between Ash and Red?
16
Are there any other uses for a Pokeball besides capturing and storing Pokemon?
5
Are there any religions in Pokemon?
9
What are the 2003 Wendy's Promotional Pokémon Toys?
2
What's the order of Pokémon manga?
23
Are there ever any animals featured that aren't Pokémon?
8
Are there any gyms in the Anime/Manga where the Pokemon trainer has to first fight other trainers?
0
Pokemon: dialogue spoken by Ursula. Can you tell me the dialogue spoken by Ursula?
5
Do HM's appear outside the games?