What's the meaning of “The coffee isn't coffee coffee”?

In Nichijou there is a scene where a random character says,

Is this a pun? What's the meaning of these sentences? Even her friend asks too. 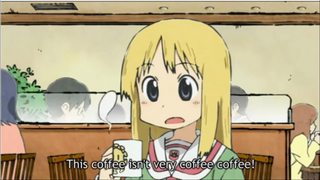 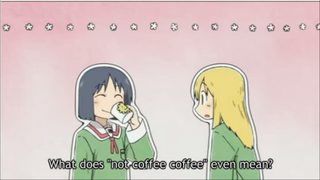 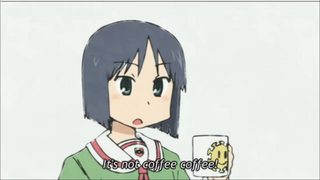 There's no pun. She is using "coffee-coffee" as a made-up adjective to describe that the coffee she is drinking doesn't have properties of coffee, and as you can tell from her friend's response, it's not standard Japanese (she could've just said something like "This doesn't taste like coffee."). The subtitle uses the phrase as-is, but something more English could be something like "This isn't very coffee."

The gag of this skit is that Girl B drinks and agrees with the fictional word, despite no description of what it means. I feel this isn't supposed to be funny, but more closer to something the viewers can agree to, like when eating out with friends and trying to describe what you just ate/drank, but cannot find the right words for it (thus just saying something like "coffee-coffee").

Jimmy's answer is good, but I want to offer one clarification.

Reduplication in Japanese is used primarily for mimetics (onomatopoeia, basically). Unlike with English's contrastive focus reduplication, you can't really apply "mimetic reduplication" to arbitrary Japanese nouns, so "kōhī-kōhī" (which is sort of a weird adjective-ified form of "coffee") sounds stranger to the Japanese ear than "COFFEE-coffee" sounds to the English ear. If I were to attempt an analogy, this might be somewhat like forming a strange derived adjective from coffee, as in "this coffee isn't very coffile".

13
What's with this face in Nichijou?
9
What game are Mio and Yuko playing on the train?
10
How different are the anime and manga versions of Nichijou?
3
Is getting hit by Perishables/Food worse?
3
What are the contents of the unaired next-episode previews included with the Nichijou Blu-rays?
3
Does the Principal ever visit his granddaughter?
1
Why do the dogs pet the characters in Nichijou?
5
What is the game console that Sasahara used?
4
What ayatori pattern did Yukko make that made Mai-chan shocked in Episode 17?
3
What made Sekiguchi embarrassed when she was asked about cram school?