Does Sakamoto know that Nano is a robot?

Nano Shinonome and Sakamoto are among the most interesting characters in Nichijou. The portrayal of daily life of a human-like AI with a condescending talking cat is something special in it's own respect, let alone Nichijou's humorous tone! 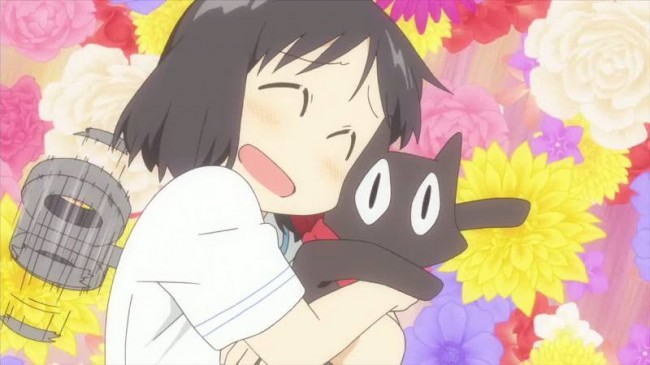 Or is it only Yukko who fully acknowledges the fact that Nano is a robot and respects her feelings throughout the series?

If not in the anime, I'm curious if it happens in the manga!

Sakamoto has had too many interactions with Nano to not be aware that she's a robot.

From an informal sense, the fact that Nano has a screw on her back is giveaway enough for Sakamoto that she's not a normal human being. The fact that it spins often enough is evidence enough in the sense that Sakamoto has at least seen her act as a robot.

Additionally, when they first meet, her age (1 year old) belies her size, maturity and responsibilities around the house, in spite of the fact that Nano still acts a bit like a kid. Sakamoto could infer that she's no normal human from that, too.

In spite of the fact that Sakamoto has never directly talked about Nano being a robot, he has a very gruff and overbearing manner of speech, him being older than everyone else. He hasn't used honorifics with anyone, and has only provided the professor and Nano with nicknames, since...

he calls his previous owner, Nakamura by her last name.

Nichijou fans! We had surmised that Sakamoto knows about Nano being a robot, but I was searching for explicit dialogue(s) where Sakamoto acknowledges the fact. So, after a lot of fun Nichijou research(yay), I've finally found official/"canon" evidence!!!

There is this wonderful "Nichijou web radio" album, where the two character trios, namely the Sucharaka and the Shinonome household sing about their silly daily lives. They're very catchy but I noticed something interesting in the lyrics!

Here are the lyrics at 2 minutes and 19 seconds:

It translates to "What even is this family? A child, a robot and a black cat!".

You can hear Sakamoto sing along.

Secondly, Sakamoto says "no comment" (literally) when Nano's raises the issue of the wind-up key on her back! I guess he finds it amusing but doesn't want to hurt Hakase's or Nano's feelings? Maybe. :P

Here are the lyrics at 2 minutes and 4 seconds:

Nano's line translates to "Won't the turnkey on my back ever be removed?". Hakase reassures by saying "It's cute..." while Sakamoto says "No comment."!

By the way, I'd never have guessed I would answer my own question a year later! It was a nice assignment and a good Japanese practice! Thanks for reading, and let's hope for a season 2 of this beautiful anime! :D

Not the answer you're looking for? Browse other questions tagged nichijou .

9
How can Sakamoto talk?
5
Why did Nano explode?
9
Where did Nano get money from?
12
What does K.Y. mean?
3
Does the Principal ever visit his granddaughter?
2
What is this dance that characters in Nichijou do during the episode breaks?
5
What is the game console that Sasahara used?
4
What ayatori pattern did Yukko make that made Mai-chan shocked in Episode 17?
3
What does the drink that Mio ordered look like in Episode 18 of Nichijou?