How did Toru and Koji pass the entrance exam in My Hero Academia?

I have seen some comments and speculations about the robot having an off switch or whatever. But I want to know if there is any source material or comment from the author on how they managed to pass the exam.

I have only seen the actual author's comment on Mineta: 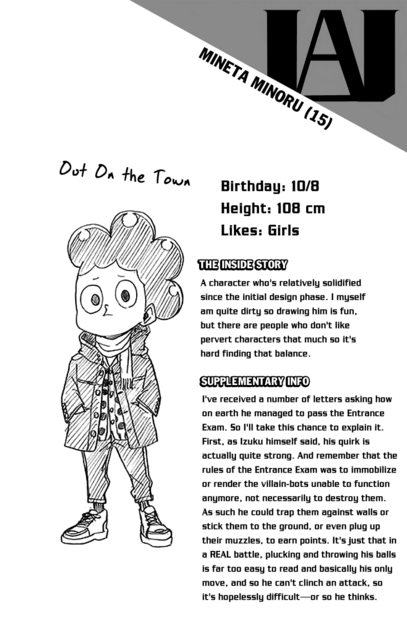 But I was wondering if there are author notes for the other characters.

A partial answer for Toru Hagakure and an unsupported thought for Koji Koda. Bottom line is we don't know, but we can make some pretty good guesses.

As with Mineta's case, it is pretty straightforward to score points. As mentioned in the author notes you've provided,

And remember that the rules of the Entrance Exam was to immobilize or render the villain-bots unable to function anymore, not necessarily destroy them.

IIRC, there was a switch off button on the Villain Bots, which Hagakure used to disable them and hence pass the entrance exam. Will try to find the source.

Also, her quirk is more than transparency/invisibility and is some sort of light manipulation as seen in the Provisional Hero Licences Arc, where she

blinded a group of participants using the light from Aoyama's Laser.

Now, Koji can talk to animals and order/request them to help. In a city setting, while it may be tough, I think he would communicate with animals such as rats/birds to help him immobilize the Villain Bots. Birds attacking sensors or rats eating through the wires.

Another thing that we may be missing is Rescue Points. Each individual's overall score is unknown, but we do know that everyone but Bakuro (Only Destroyed) and Midoriya (Only Rescue Points) scored a combination of both points. Since both these individuals are shown to be very "nice", I'd assume they got their fair number of rescue points.

This is all guesswork, but another thing we could consider is the fact that some of the students could steal some points, such as something like Bakugo blasts one, and Koji, who can control small animals, could have them deactivate the robot in its slowed/weakened state, instead of destroying them with brute force of their quirk or strength.

We can see that some of the characters, while having powerful quirks, aren't as used to using them. Eraser Head did a lot of training with them that first class, so some of the stronger characters might not be as adept to using them, such as Froppy. If they're not as adept in using them, it makes it easier for weaker quirk users to take some points, unless you're Deku, and you take rescue points.

This is all really just me guessing, so don't take it to heart.

BreadBread
1
Add a comment  |
Highly active question. Earn 10 reputation (not counting the association bonus) in order to answer this question. The reputation requirement helps protect this question from spam and non-answer activity.

0
How did Hagakure pass the UA entrance exam?
8
How did Mineta Minoru get into UA?